Since I was to spend three weeks in northern Utah at the Park City Mathematics Institute‘s 2016 program on The Mathematics of Data, I decided to drive from the bay area and bookend the trip with some nature. On the way in, I spent 48 hours in Captiol Reef National Park, a place I’d only spent an afternoon (and not hiked much) before. I camped two nights at the Fruita campground in the park and got in three short-to-medium day hikes.

Day 0
Oakland, CA to the middle of nowhere, NV

I left Oakland around noon on Monday, planning to drive through Yosemite and out to Alkali Hot Spring near the ghost town of Goldfield, NV. I got pulled over twice, once getting a speeding ticket and the second time talking my way out of it. I made it to the hot spring around 8:15pm, in time for sunset. It was gorgeous and the soak was great—I had the hot spring all to myself. I spent a few hours in the tubs and then crawled into my car to sleep, too lazy to set up camp. Around 10:30pm, a pickup truck with some shady looking dudes rolled in and I got a little freaked out being out there in the middle of nowhere (7 miles on a dirt road) on my own, even though I had pepper spray (thanks dad!), so I decided to drive back to Tonopah and find a motel. I had seen the Clown Motel on my drive in and hoped to go from being freaked out by shady dudes to being freaked out by decrepit clown memorabilia next to the cemetery, but I rolled up to the office at 11:03pm to a sign that read “CLOSED. NO ROOMS AFTER 11pm.” I yelped for alternatives but finding not much, I opted to just drive for a while. A few miles out of Tonopah I passed a sign that said NO GAS 116 miles and I was glad I had just filled up. I got tired around 1am and pulled over on the side of the road to sleep. The stars were incredible. I could see the milky way!

I woke up around sunrise and started driving the remaining 7 hours to Capitol Reef. I made it a few hours before getting tired again, so I pulled over to sleep for an hour and then hit the road again. I arrived at the visitor center in Fruita around 2:30pm. I grabbed some maps and postcards and then headed over to the Fruita campground to find a spot. As I was cruising through about 3pm, the campground was about half full. All of the good car/RV spots were taken, but the lovely “walk-in” sites were available. The difference between this and the other spots is that you have to walk about 25 yards from your table/grill to your car. ¯\_(ツ)_/¯ I set up camp and then drove over to the Chimney Rock trailhead to hike the 3.7 mile loop.

This moderate lollipop hike begins at the Chimney Rock trail head west of Fruita on Highway 24. Chimney Rock itself is a big red rock that looks like a chimney. Sorry, I don’t have a photo of it for some reason. You’ll have to use your imagination. The first bit of trail leads from the parking lot back towards the cliffs and then steeply up to a junction, where the choice is clockwise our counter around the loop. Choosing the former, I gained almost all of the elevation for the hike rather quickly, in the first mile. The trail brought me up to the edge to look down on Chimney Rock and then along the south of Mummy Cliff with spectacular views of the Waterpocket Fold. 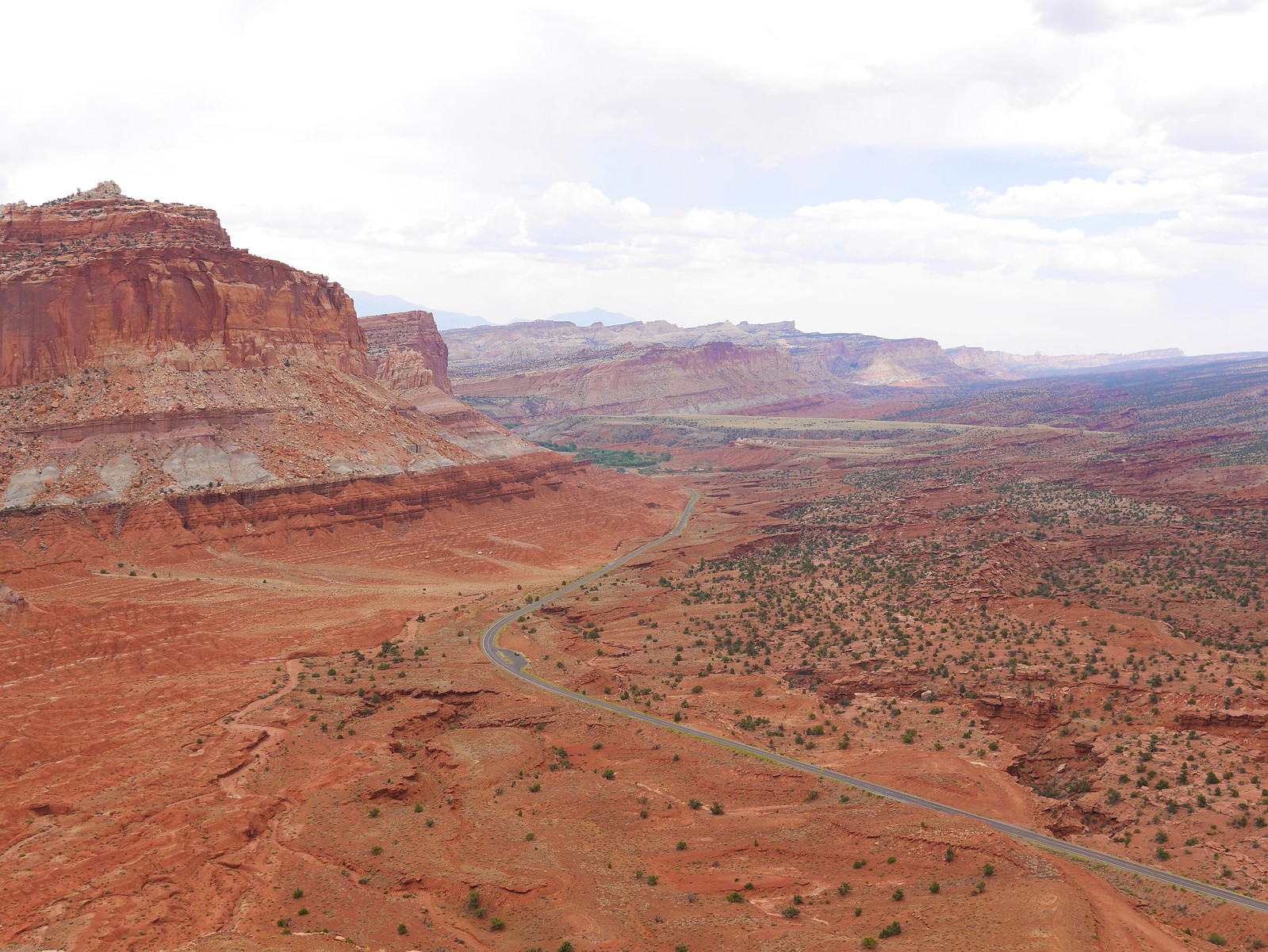 The trail bends back to the left (north) and leads past spectacular cliff faces as it makes its way to connect with Spring Canyon. There’s a junction back here where I hung a left and followed the wash back to complete the loop as a storm rolled in. 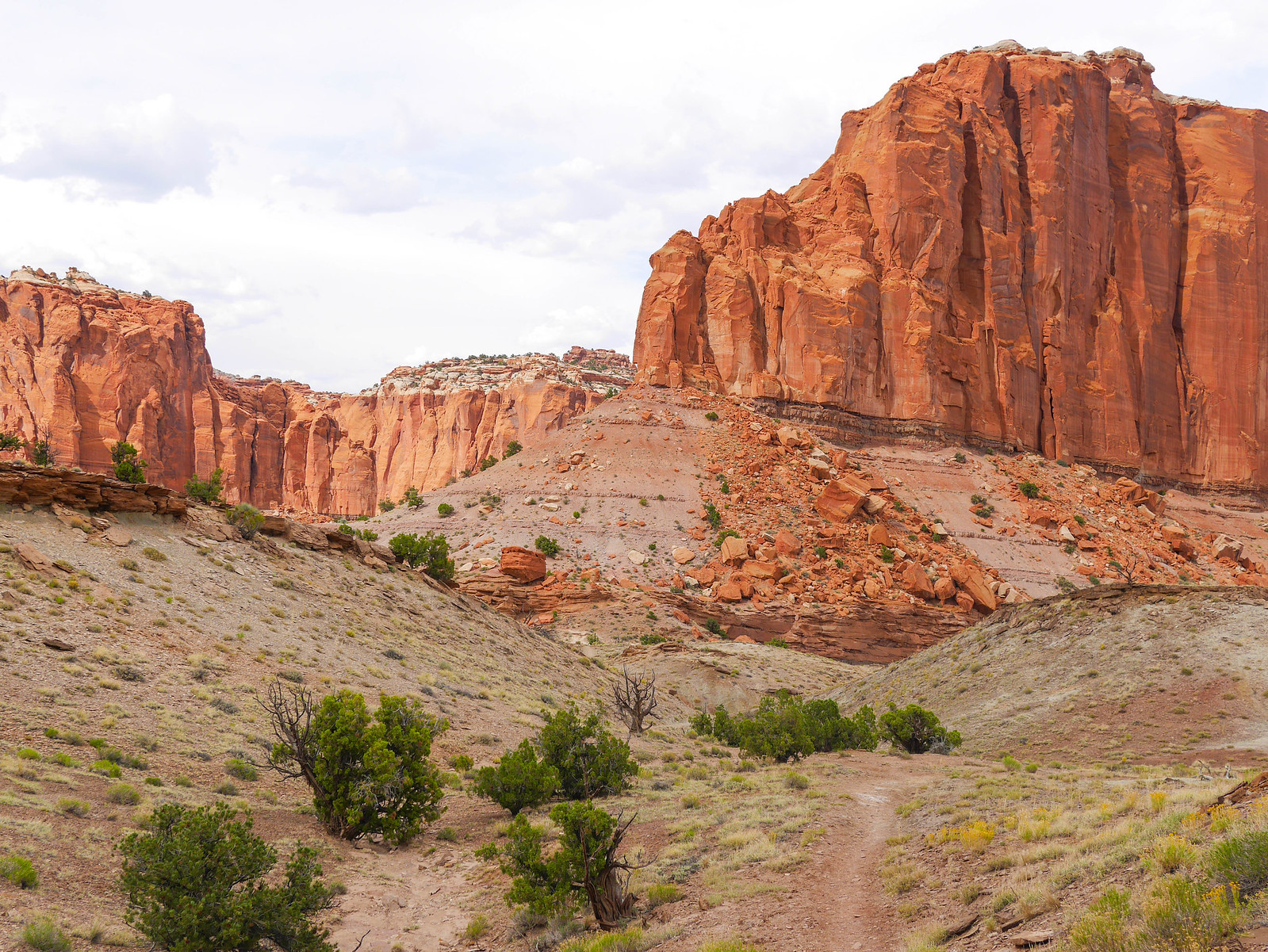 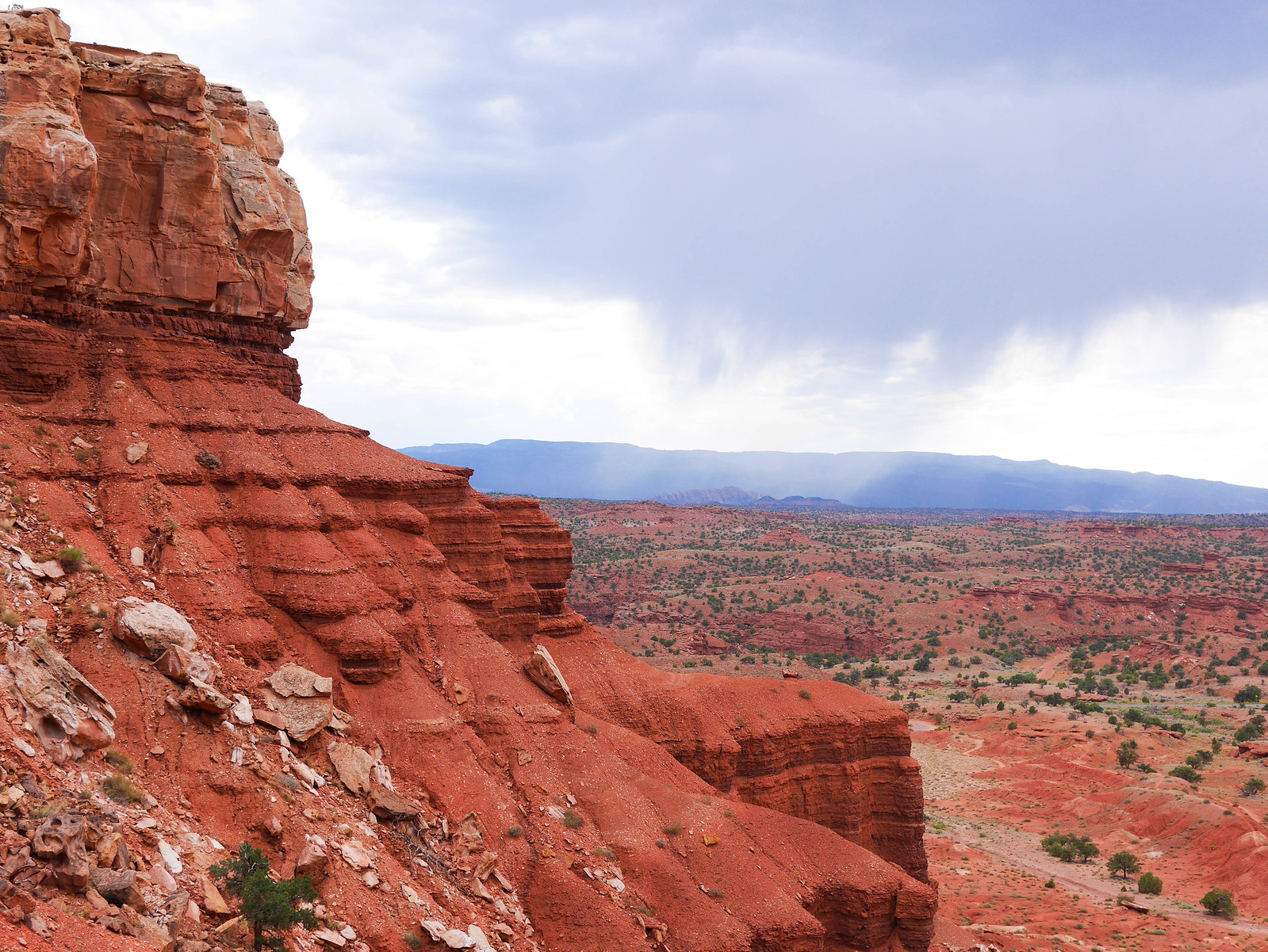 The hike took me less time than I expected, so I went up to Torrey for dinner. There aren’t a lot of options and I had an unremarkable taco salad. Back at camp, I cleaned up and read for a bit before tucking in at around 10pm. The next morning I wanted to get up early so that I could complete my hike before the forecasted afternoon thunderstorms.

I got up around 7am and was on the trail by 8am. The Cohab Canyon trail has two entrances, including one right at the Fruita campground. I walked over from my camp and began the steep switchbacks that climb 350 feet into the mouth of the canyon. On the way up, I had great views of Fruita and the Waterpocket Fold. 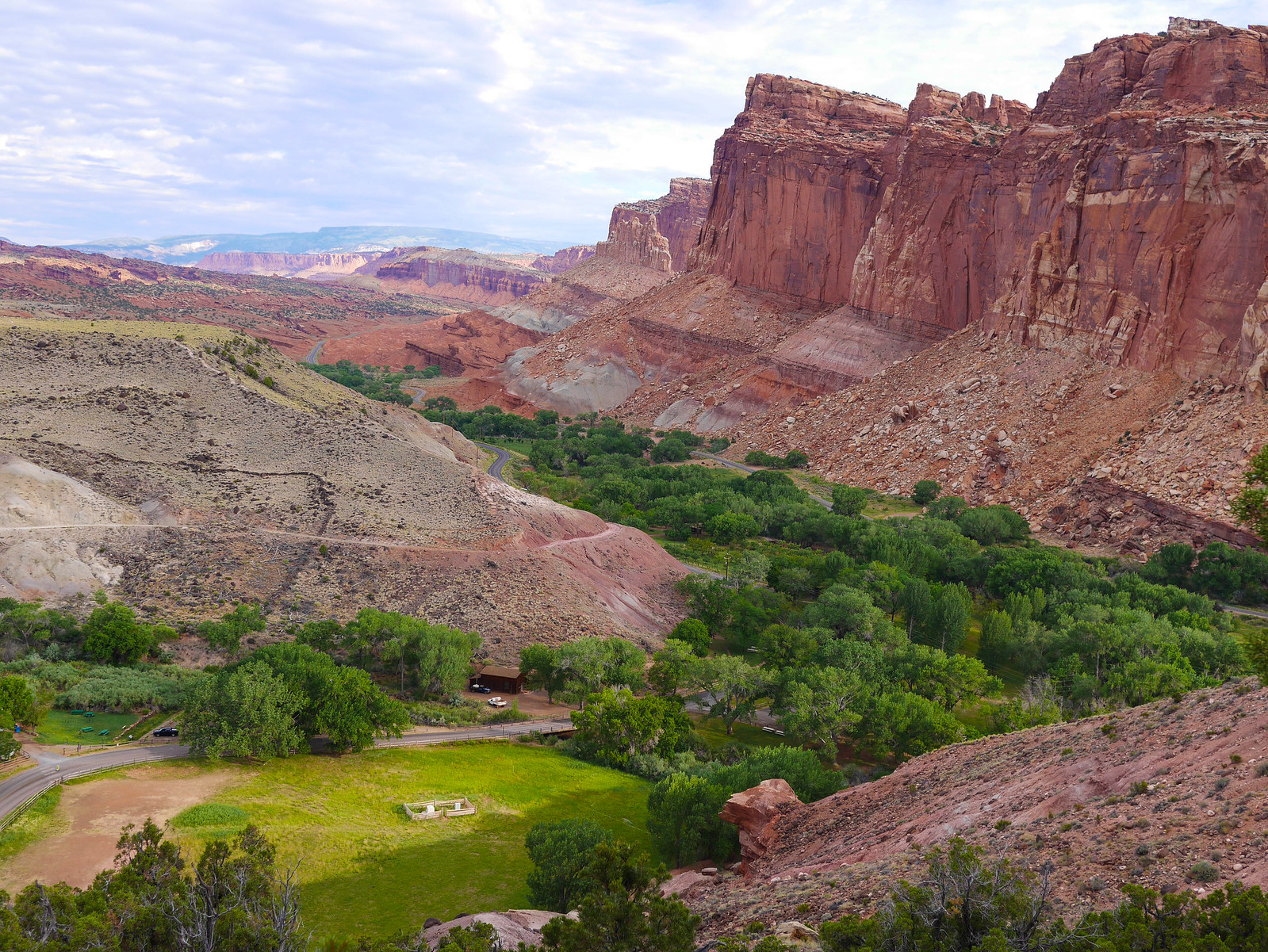 After the short but steep climb, the trail levels out and then bends sharply into the break in the wall of rock that marks Cohab Canyon. 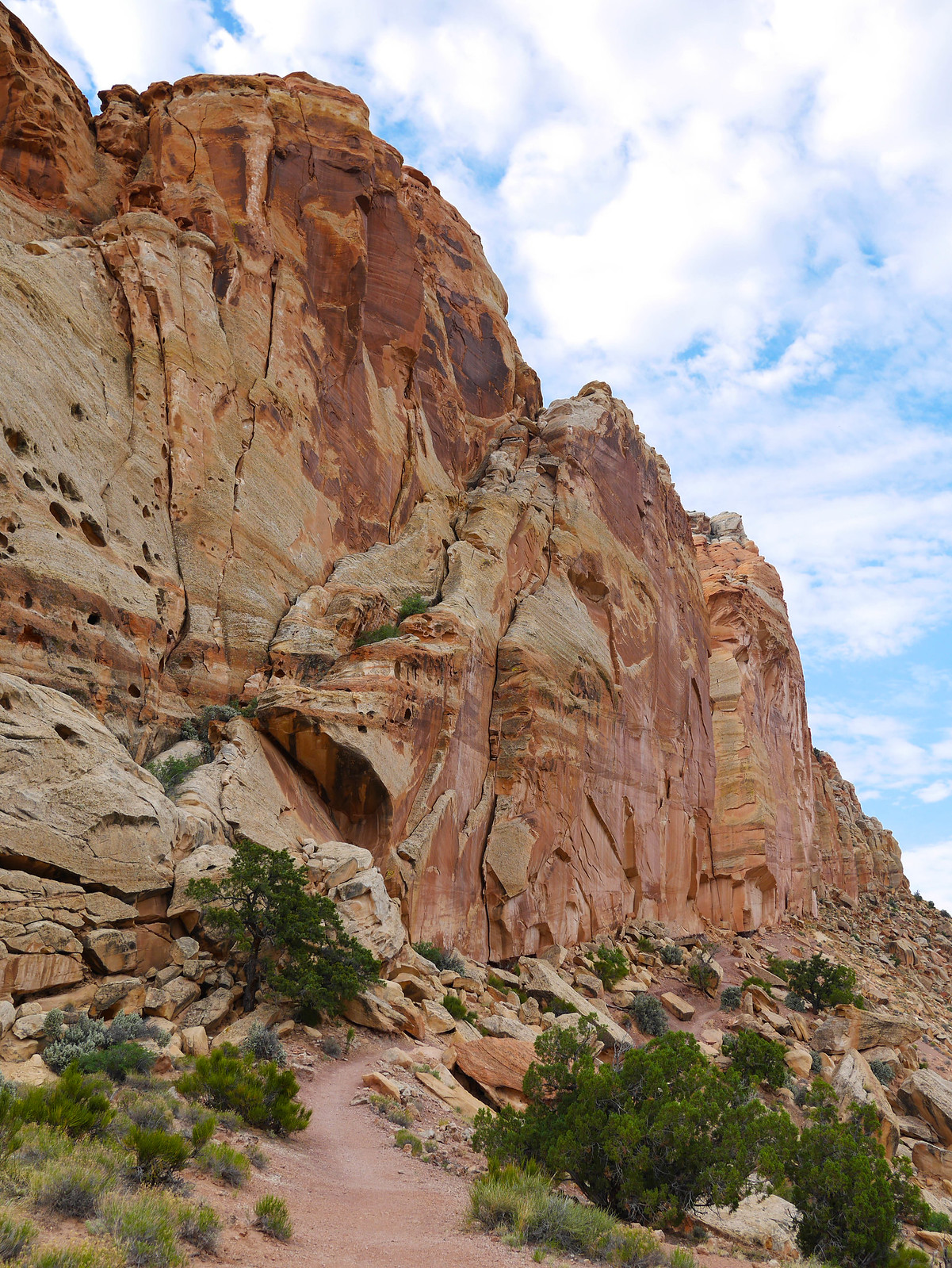 The canyon is lovely. No narrows, but interesting folds, rock formations, and side canyons along the wash as I hiked down. 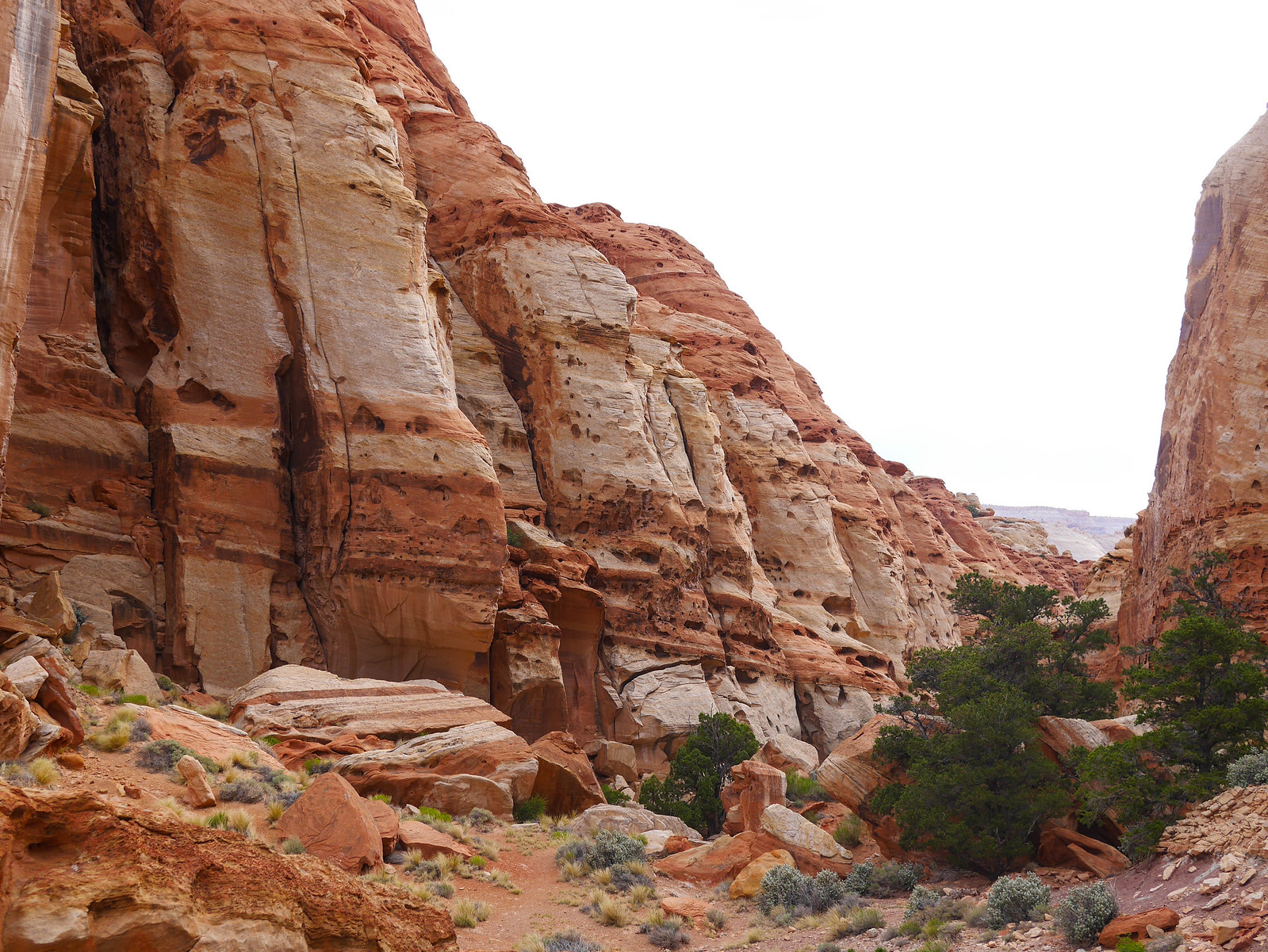 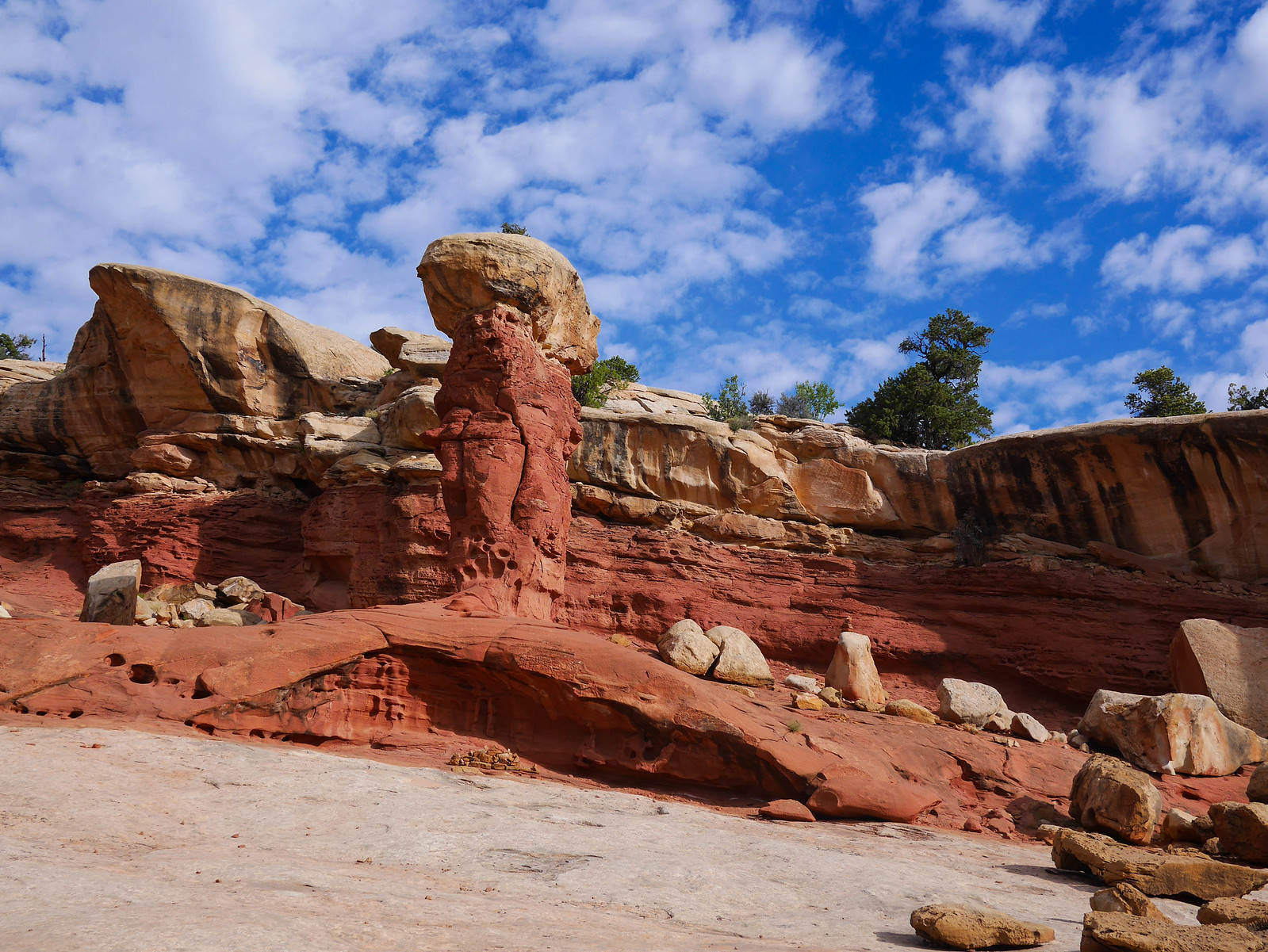 Most of the way down the canyon, there is a spur trail to the left that leads to two overlooks. I am not ever one to pass up an overlook option even if it means climbing out of a canyon! It’s not too far to ascend, a hundred feet or so, to the two lookouts. 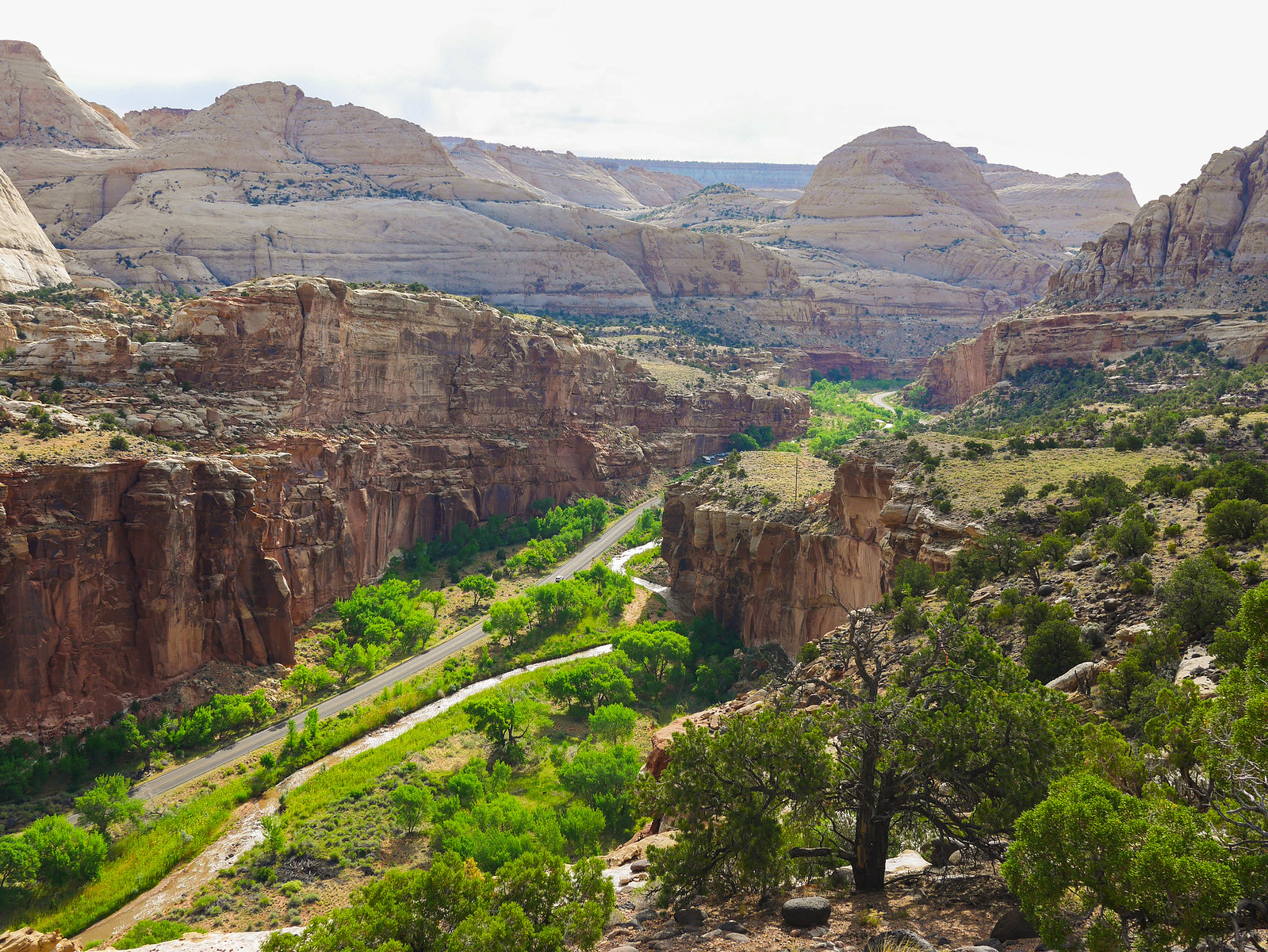 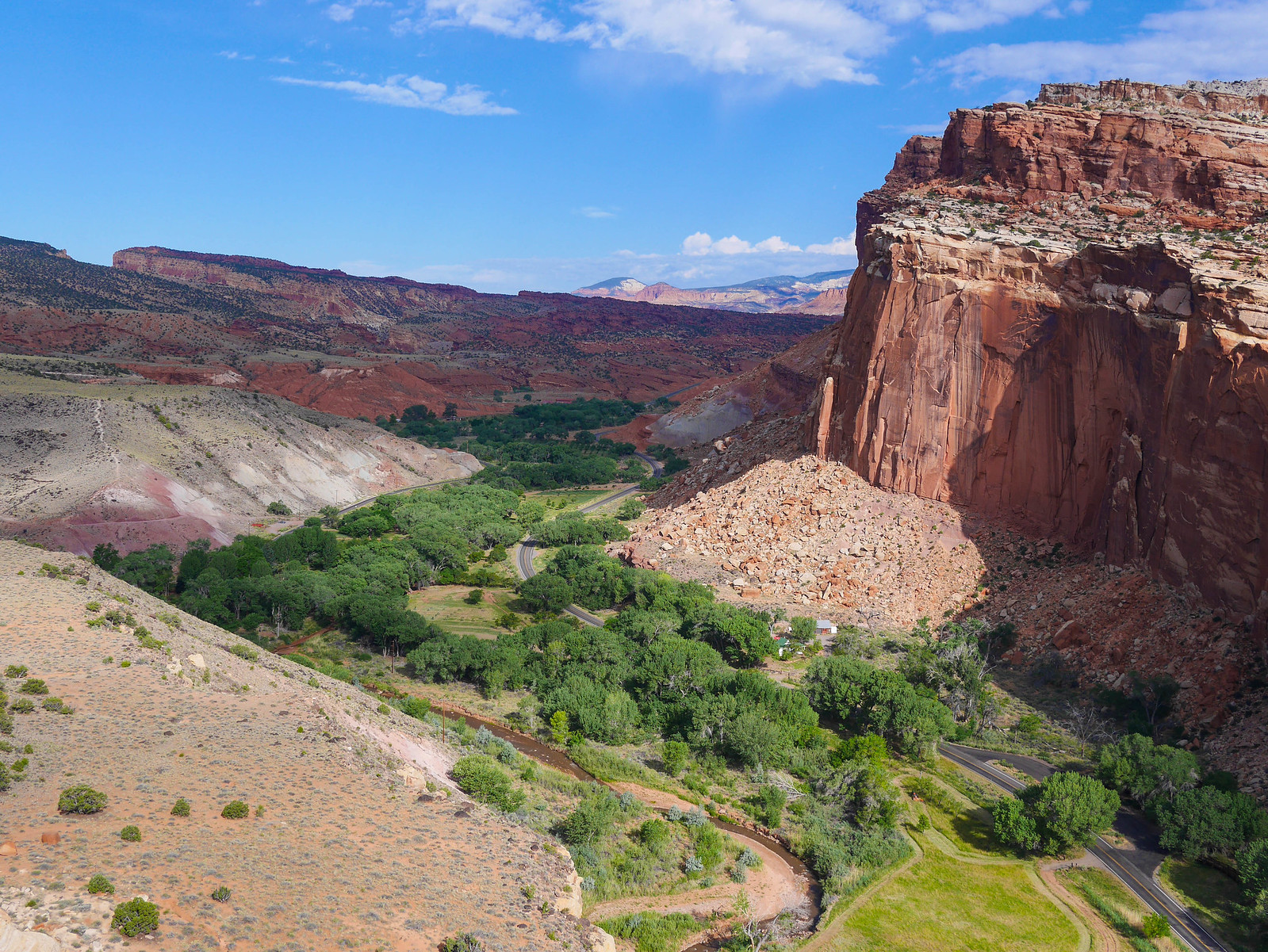 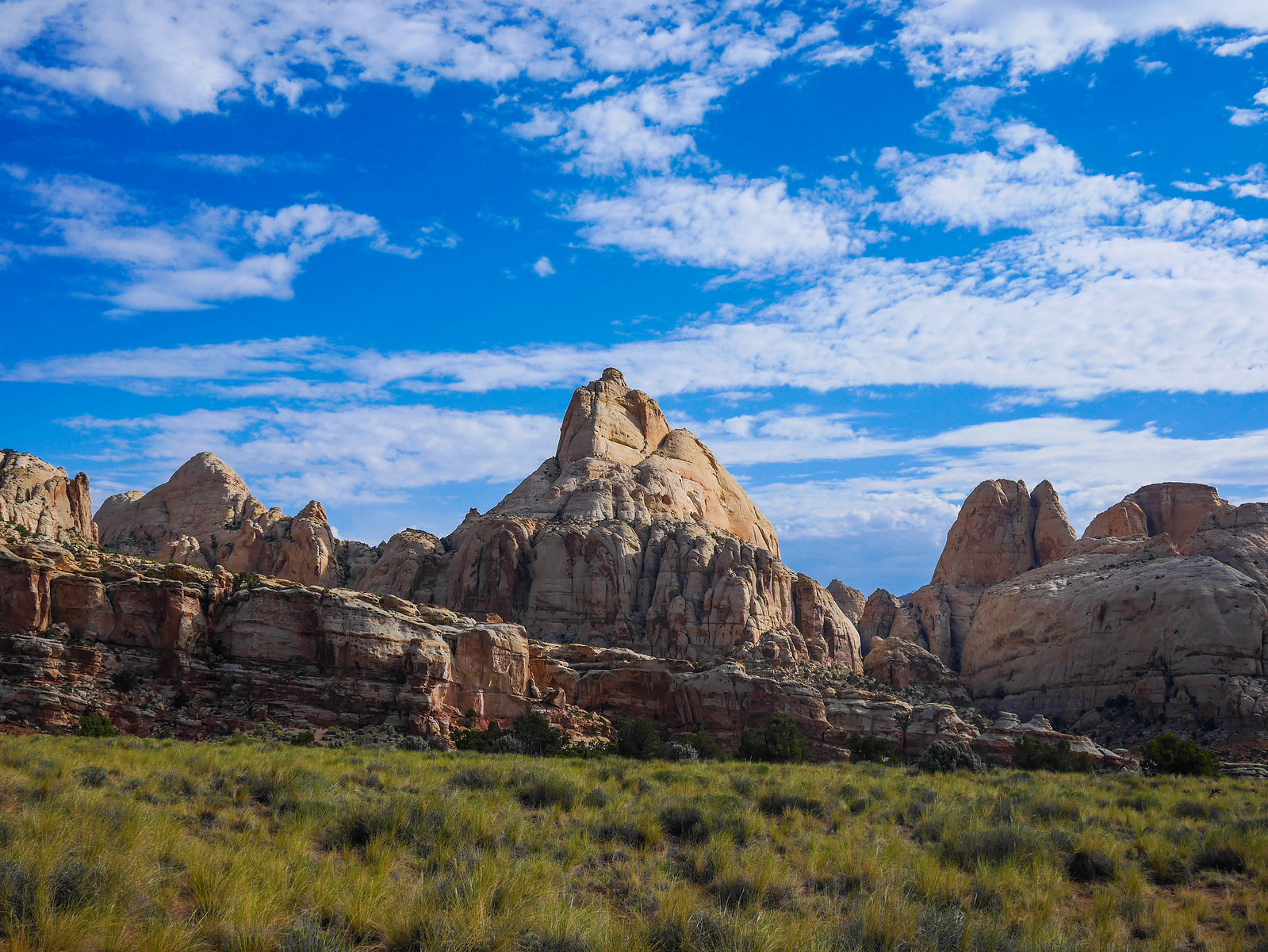 I returned to the trail and took a right at the next junction to join the Frying Pan trail, which climbs steeply out the south side of Cohab Canyon and offers a great view back down into it as you ascend. 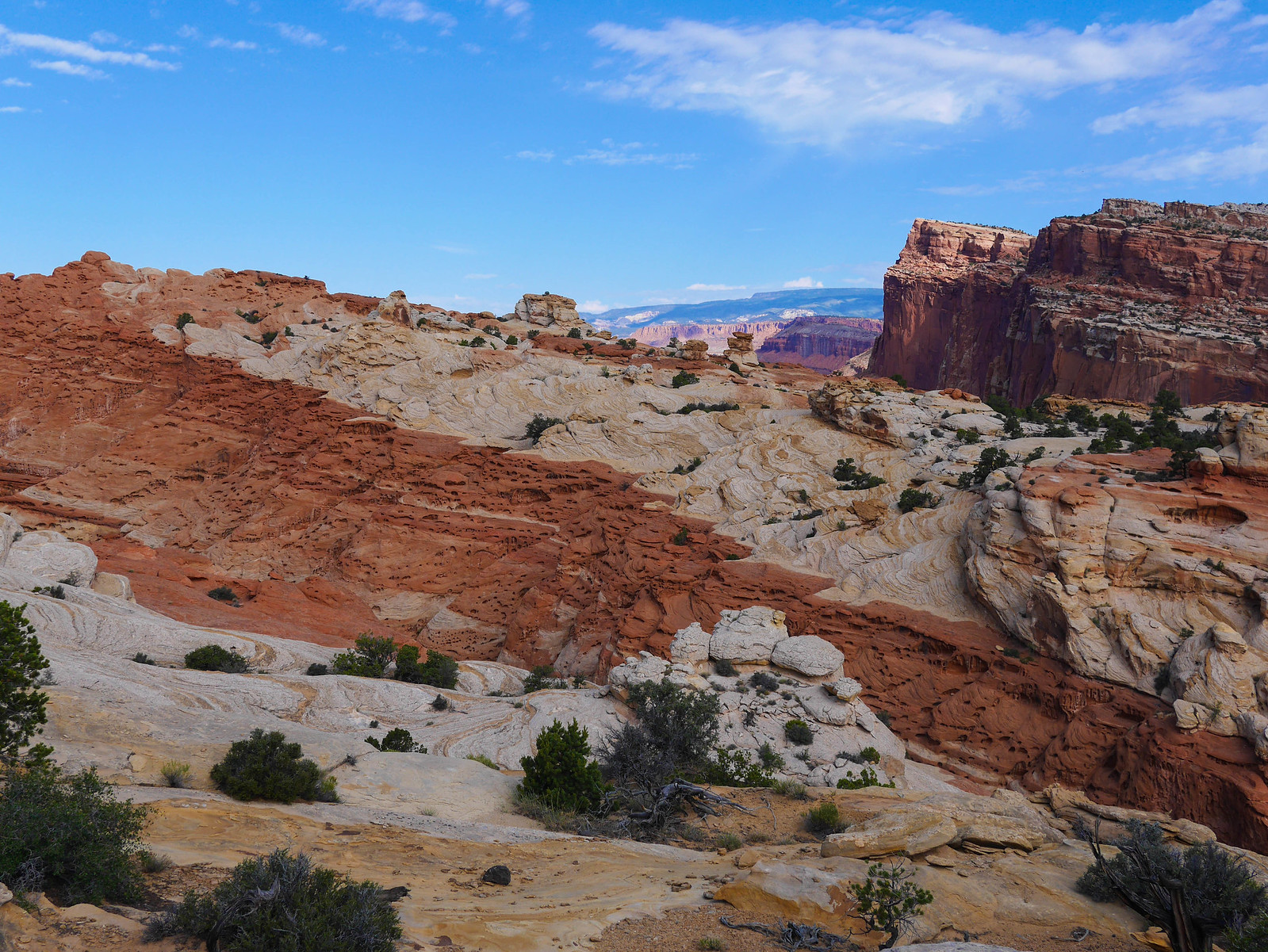 The trail ascends some more to a plateau with some nice geology and interesting rock formations, including the so-called Frying Pan, which I couldn’t get a good picture of due to the angle of the light. The trail then descends into the next wash before climbing again, rather steeply this time at about 800 feet of gain in less than a mile. The trail is totally exposed and I was feeling a bit hot, so this part was a bit of a slog, even though it the views were outstanding.

The trail stays high on this plateau for a while before descending towards Grand Wash. I hadn’t seen anyone since Cohab Canyon, so I used the timer to take a photo of myself enjoying the view of Fern’s Nipple (tehee). 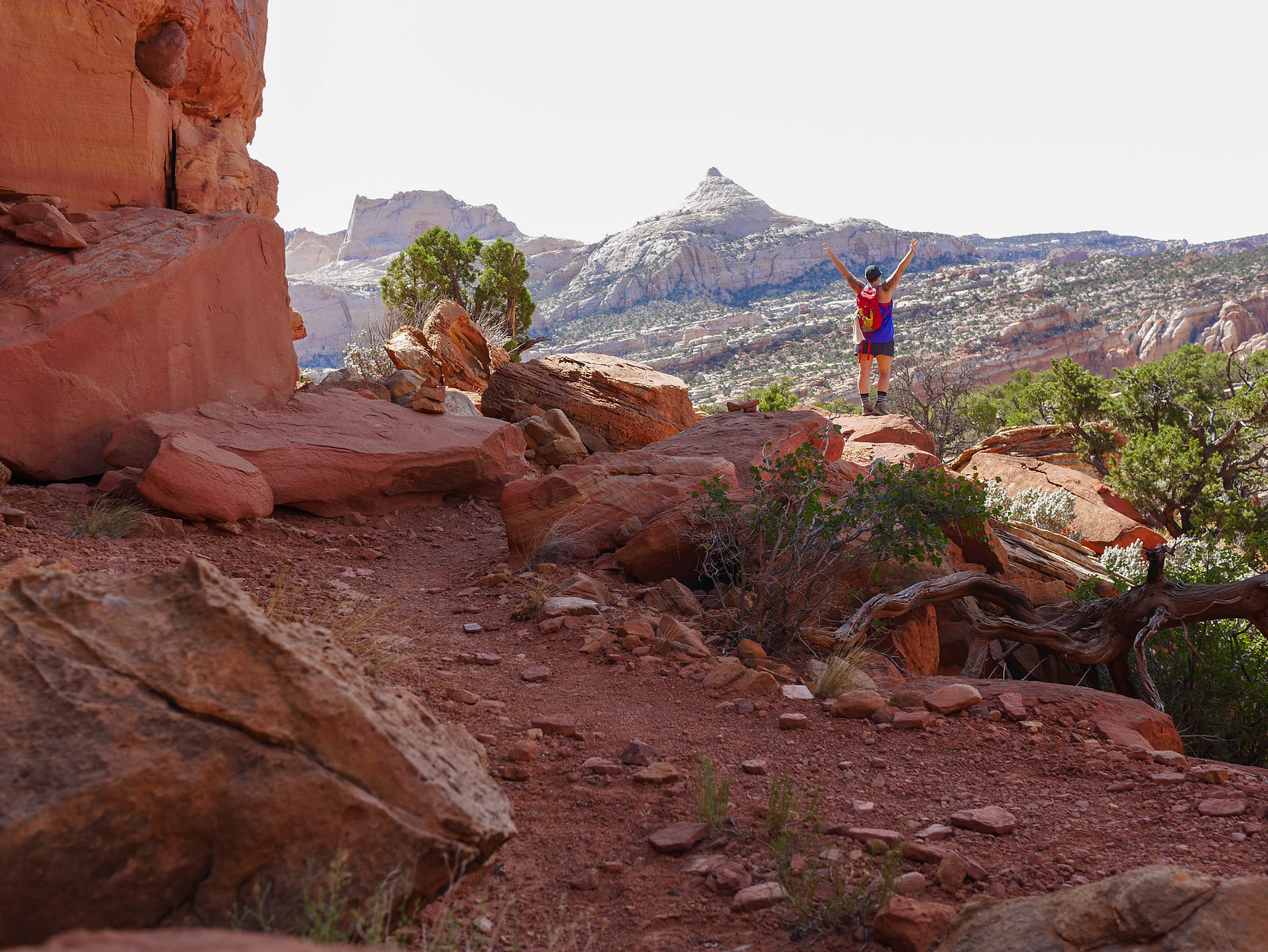 I took the spur trail out to Cassidy Arch, a spectacular arch that one can walk on! Out here a nice guy named Francesco from Tuscany was kind enough to take my picture. He headed down while I lingered a bit more to enjoy the view. It started to get windy and when I turned around to look to the north, all of a sudden the entire sky was dark! It was time to head down, and as I hit the junction with the Frying Pan trail (to turn right this time, down to Grand Wash), I could hear thunder not too far off. The whole section of trail from here down into Grand Wash was really impressive and I was bummed that I had to rush through it due to an impending storm. 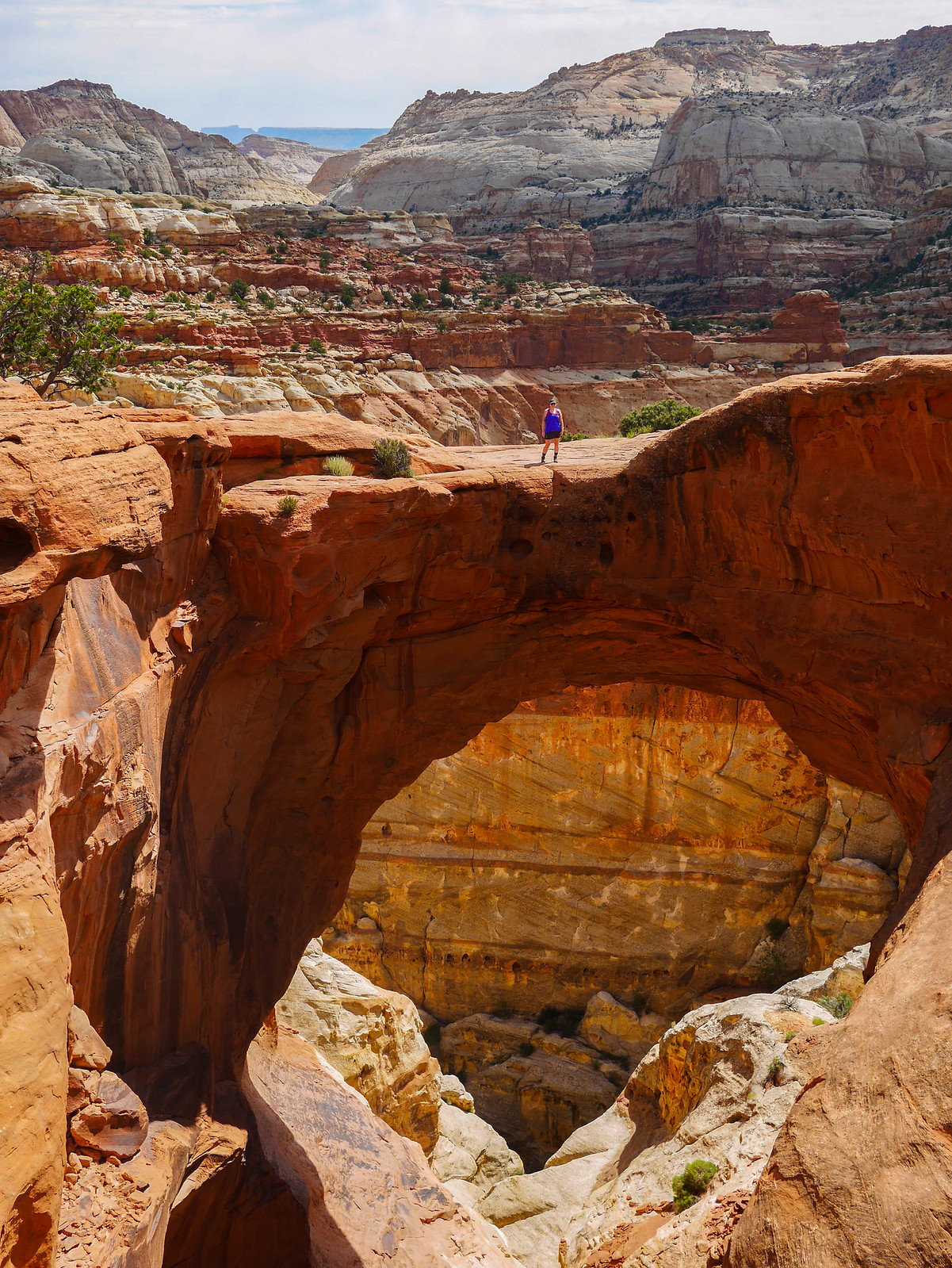 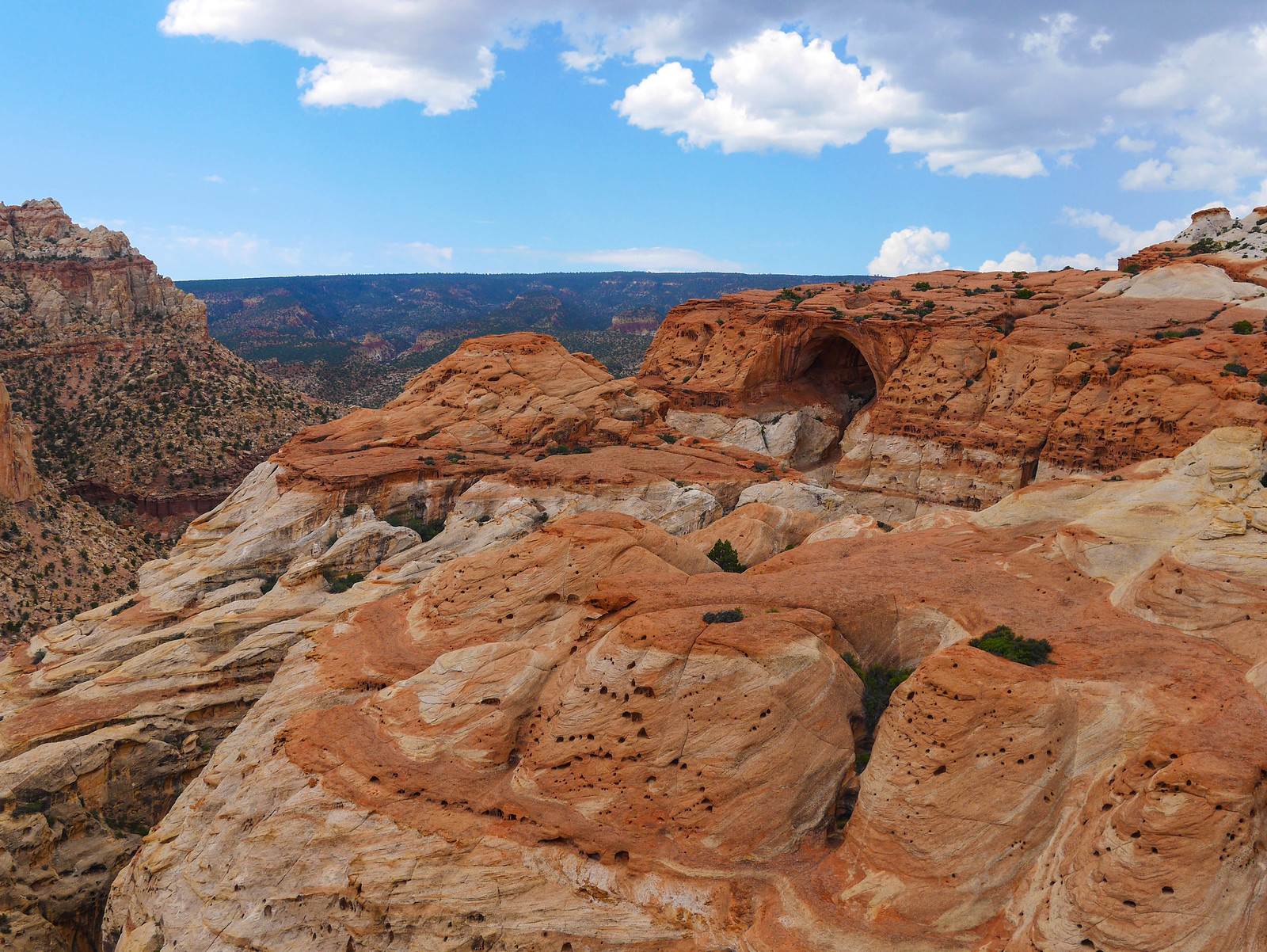 When I got down to the parking lot, I was happy to see Francesco there. I had been planning on trying to hitch a ride back to Fruita so that I wouldn’t have to walk 3.5 miles down the wash and along the road. He was happy to give me a lift and we chatted about his travels as the sky opened up and began pouring. Turns out he went to Vancouver for a pyrotechnics (!) competition and his team won (!!). He liked the city so decided to stay for six months working as a delivery driver, then rented a car for 5 weeks and drove around Mexico,  then lived in San Francisco for a few weeks before getting a car for another 5 weeks to drive around the American west. And I only had 48 hours T_T

It rained most of the afternoon, so I drove up to Torrey to find a shower and some food. I grabbed a spot at the Rim Rock Cafe and did some editing for a few hours before driving back down for the night.

I slept in until 8am but still was packed up and asking the ranger what my final hike should be by 9am. She suggested Rim Overlook or Fremont River Overlook. Since I’d be hiking in the morning, I decided to opt for the Rim Overlook since the sun would be mostly behind me as I looked out from the trail. Before I started hiking, I drove east a bit on Highway 24 to check out Capitol Dome. 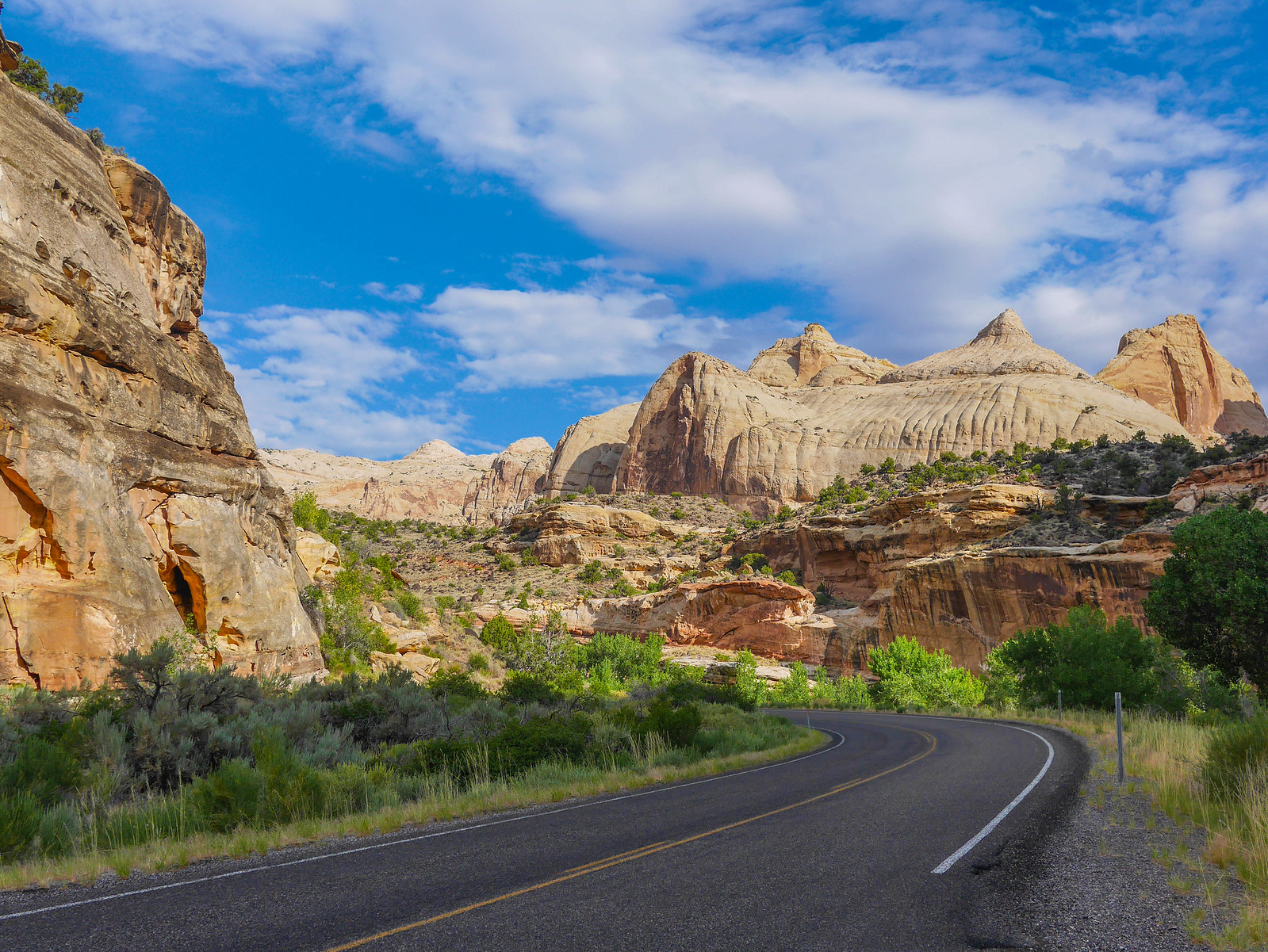 I was the the third car to park in the Hickman Bridge parking lot (when I returned, it was overflowing with cars waiting for spaces!). The trail up to the Rim Overlook shares its first half mile or so with the Hickman Bridge trail. It starts out down by the Fremont River. 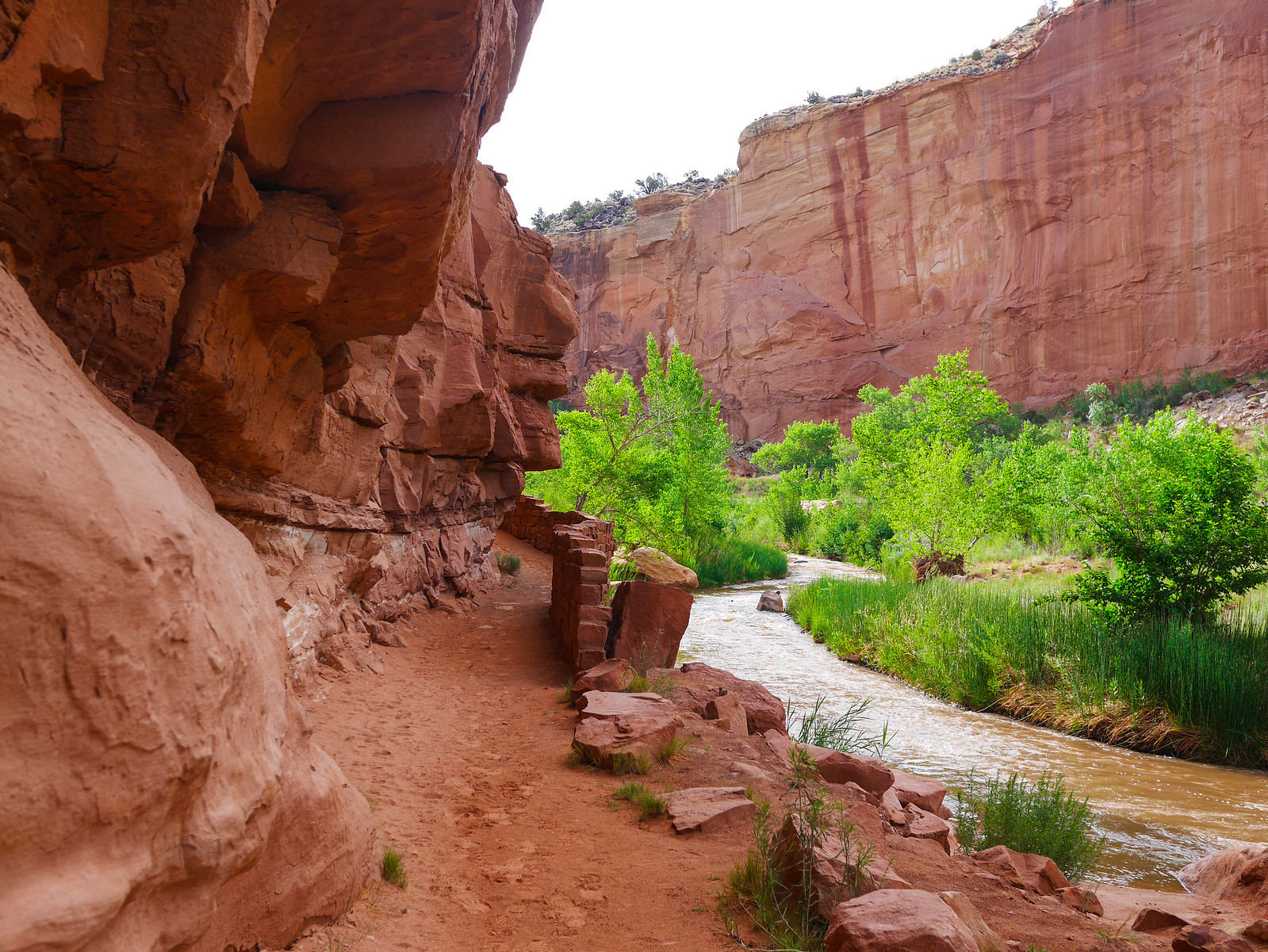 The trail gains elevation at a moderate pace with views opening up pretty soon after the Hickman Bridge overlook. It zig-zags out to the rim and then back towards the cliffs to cross various washes and ridges as it ascends up to the overlook. 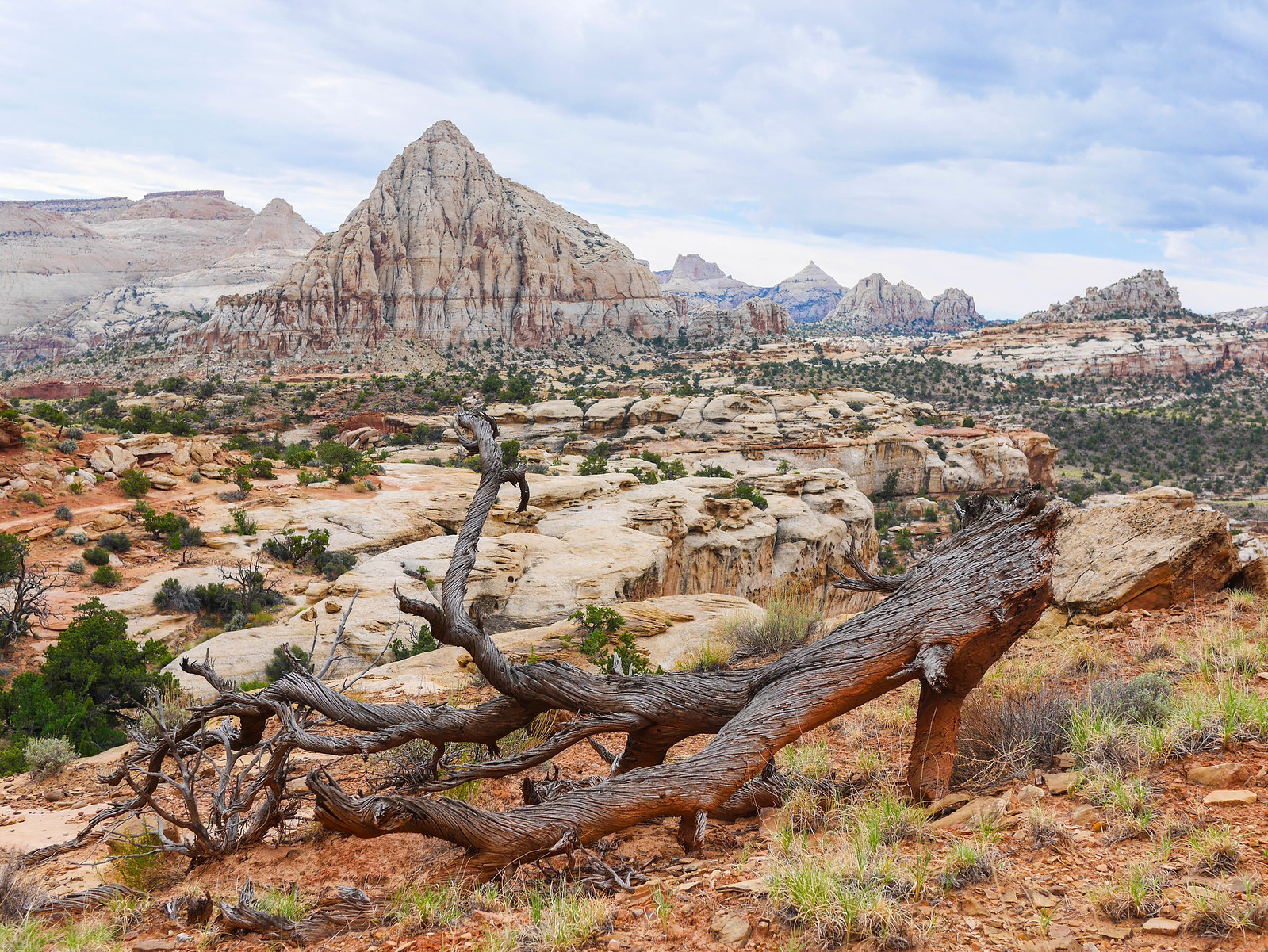 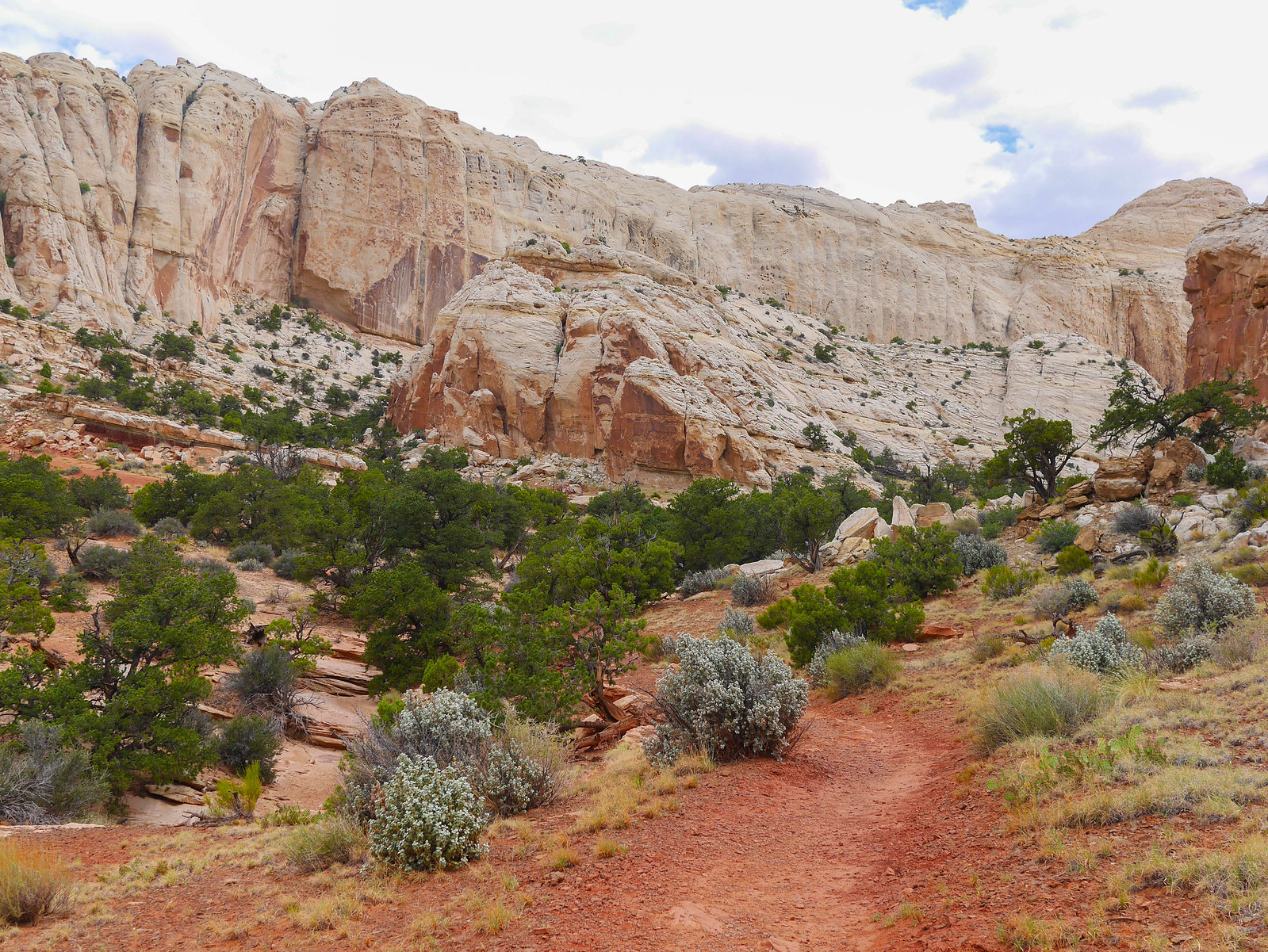 At the overlook, I couldn’t help it but sit on the edge of the 1,200 foot cliff. I had a snack and then headed back to the car. 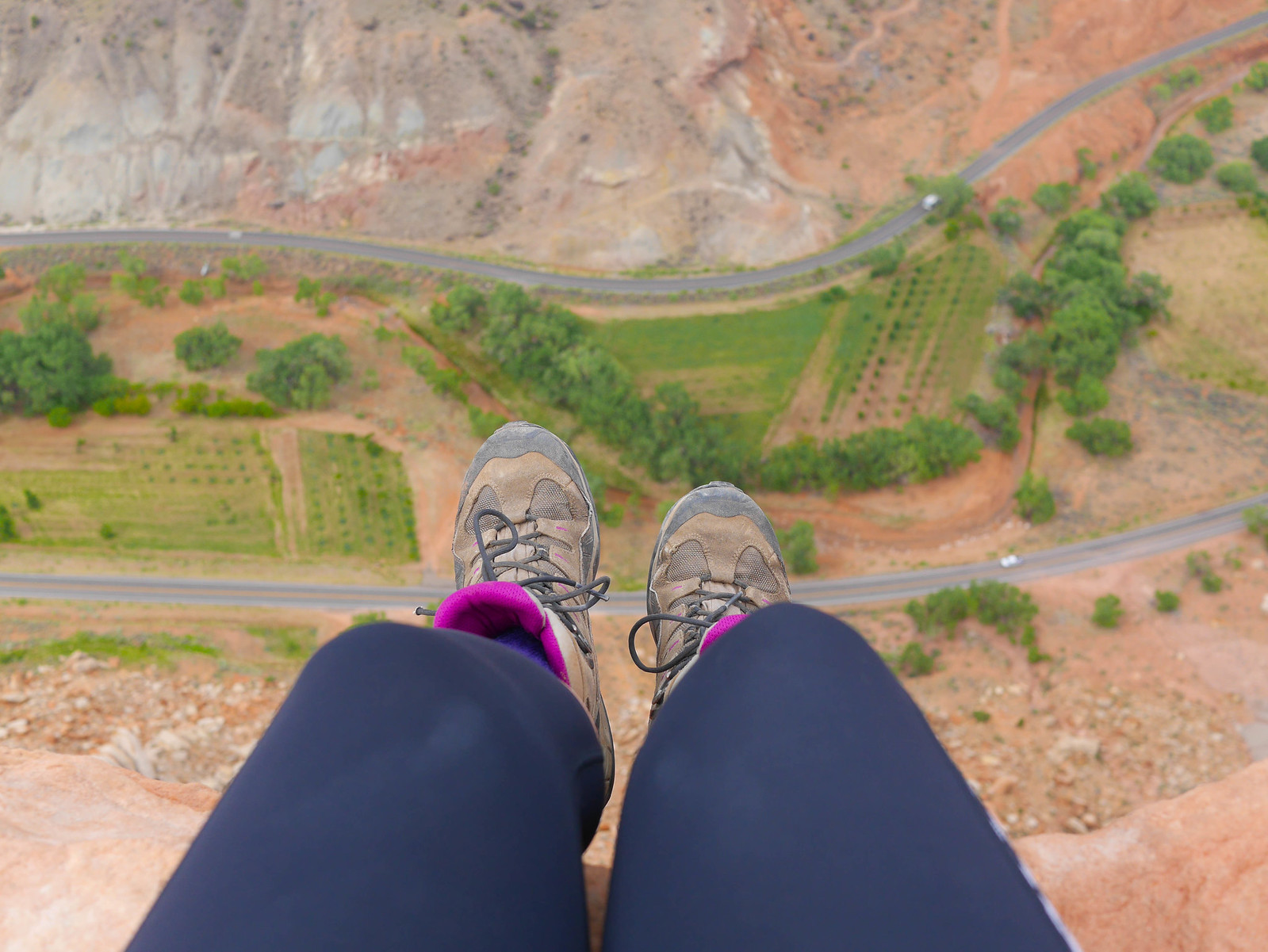 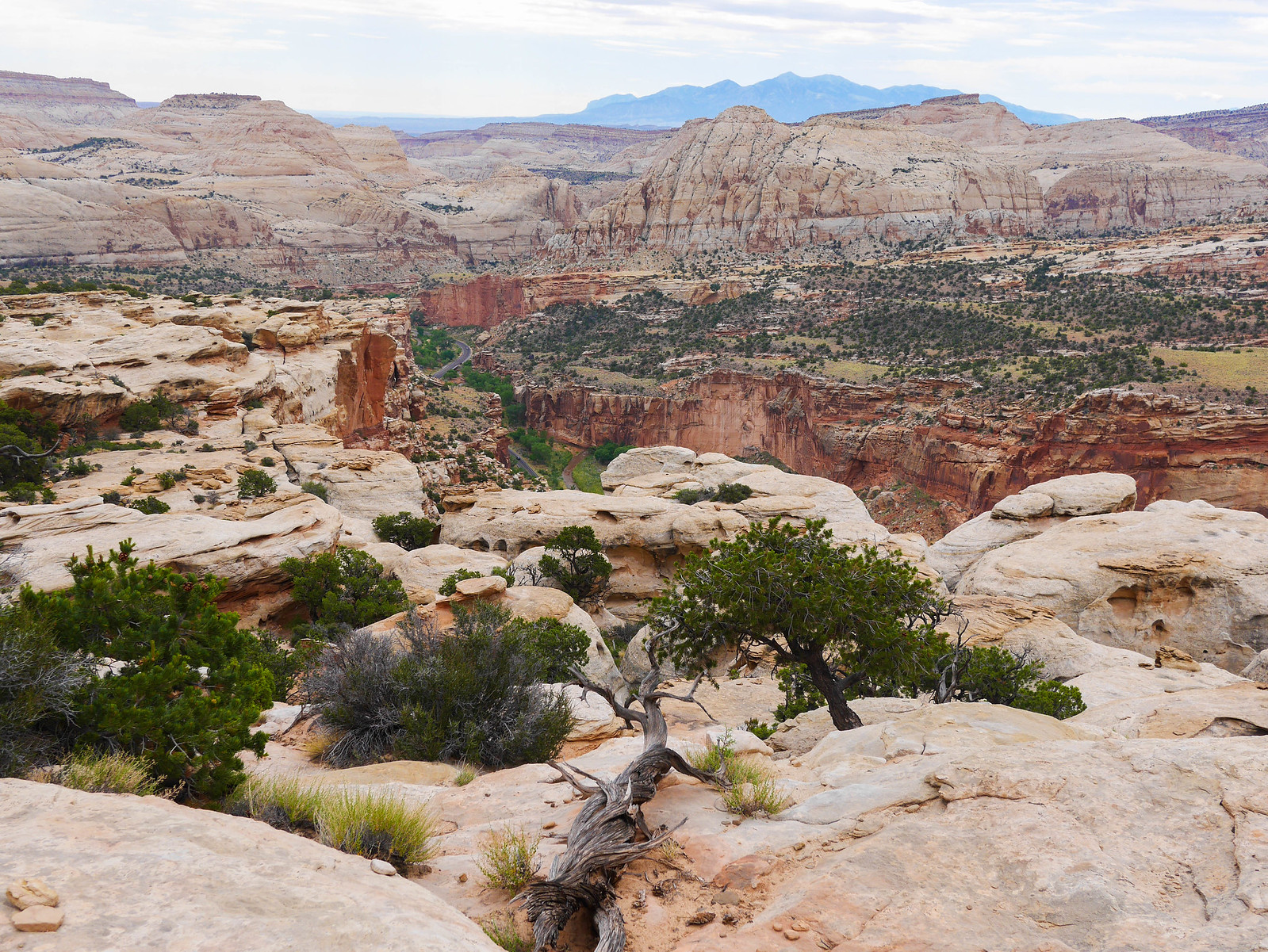 I still had a few hours to kill before I had to drive up to Midway for the conference, so I checked out the petroglyphs and picked some apricots. Oh yeah, did I mention that Fruita was once a Mormon town and there are orchards where you can pick fruit? Because there are! 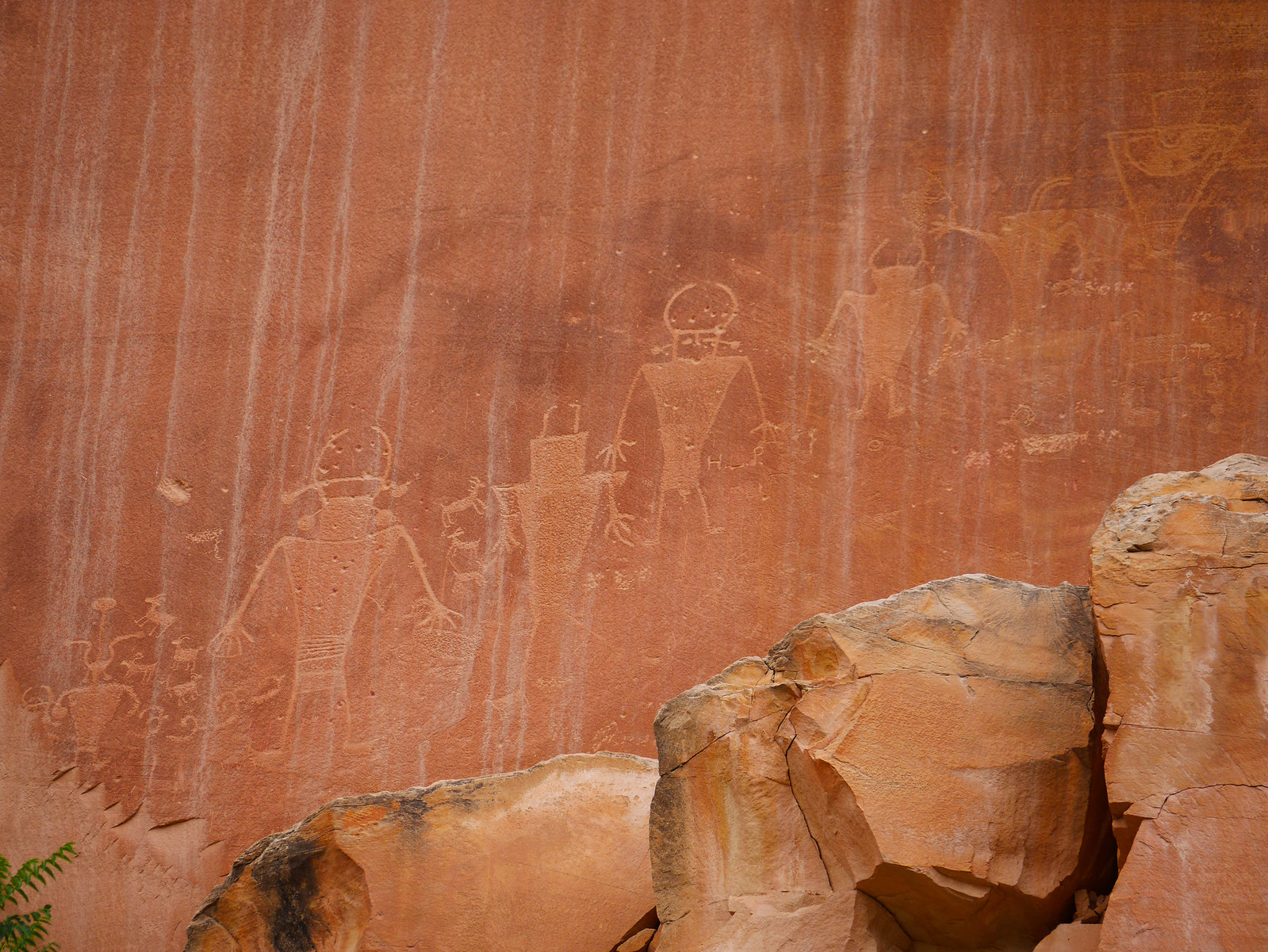 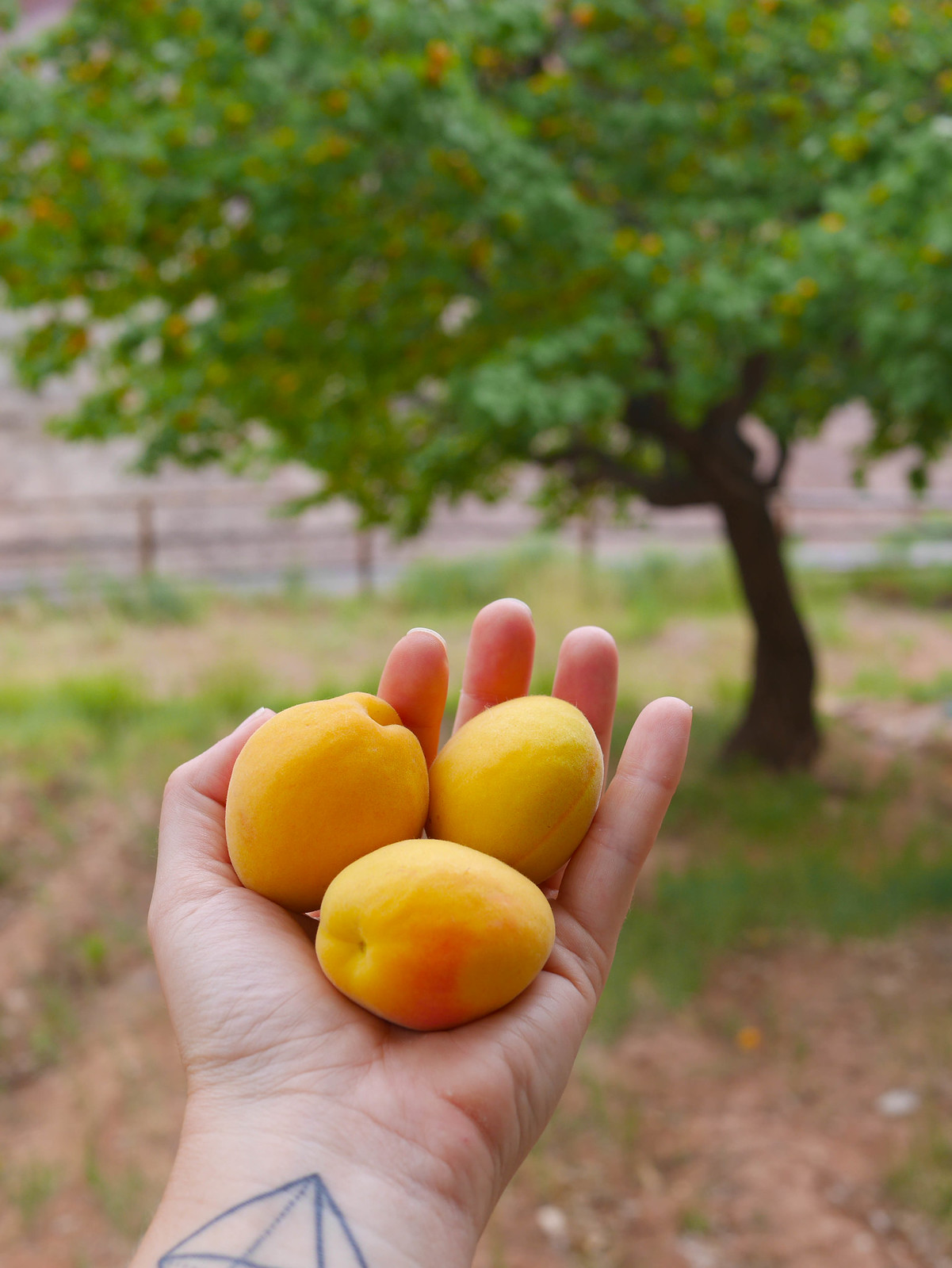 At the end of the scenic drive there is a passenger car-friendly dirt road through Capitol Gorge, so I decided to have a little drive. I couldn’t believe that there was a road in this impressive gorge! 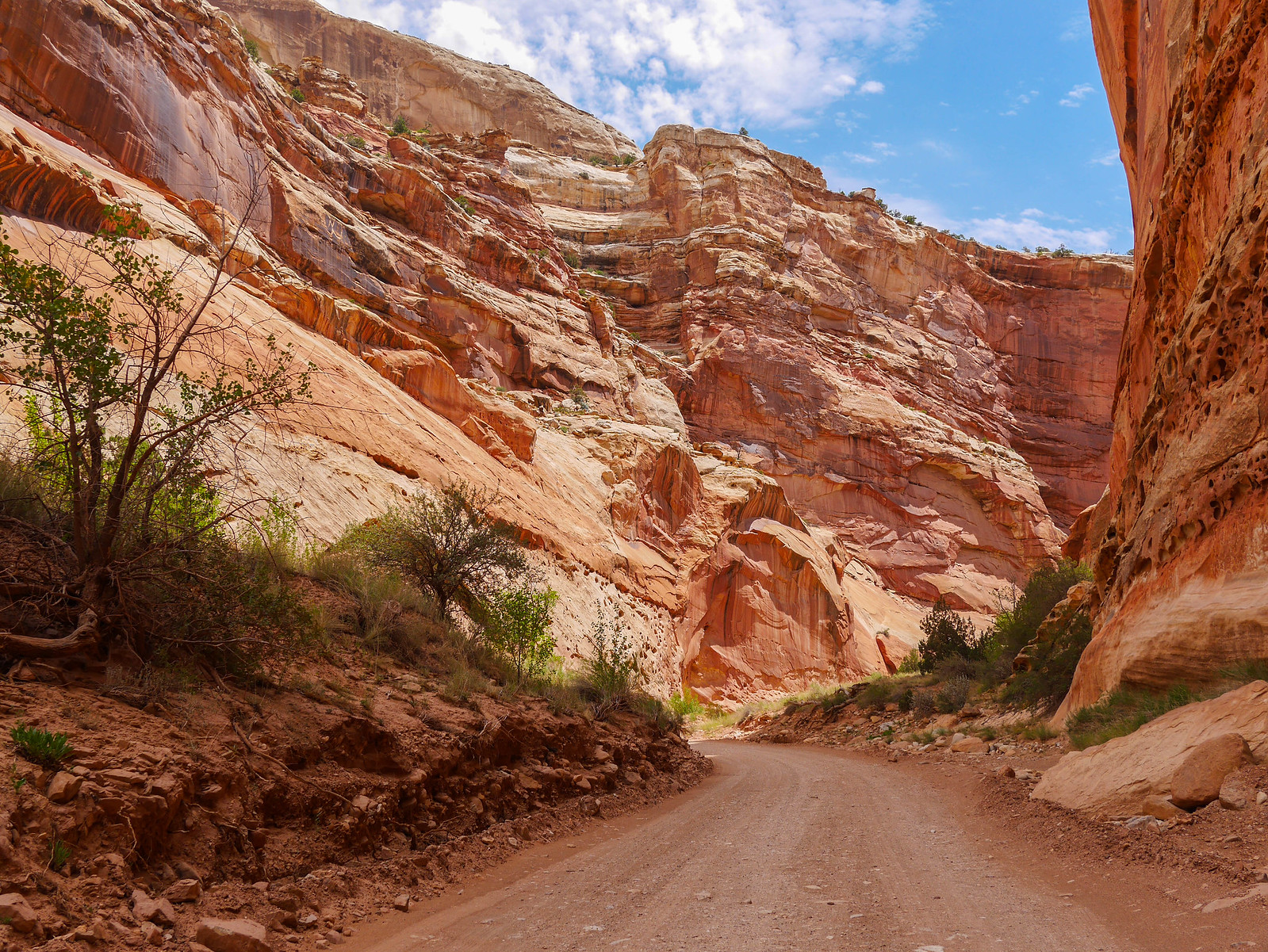 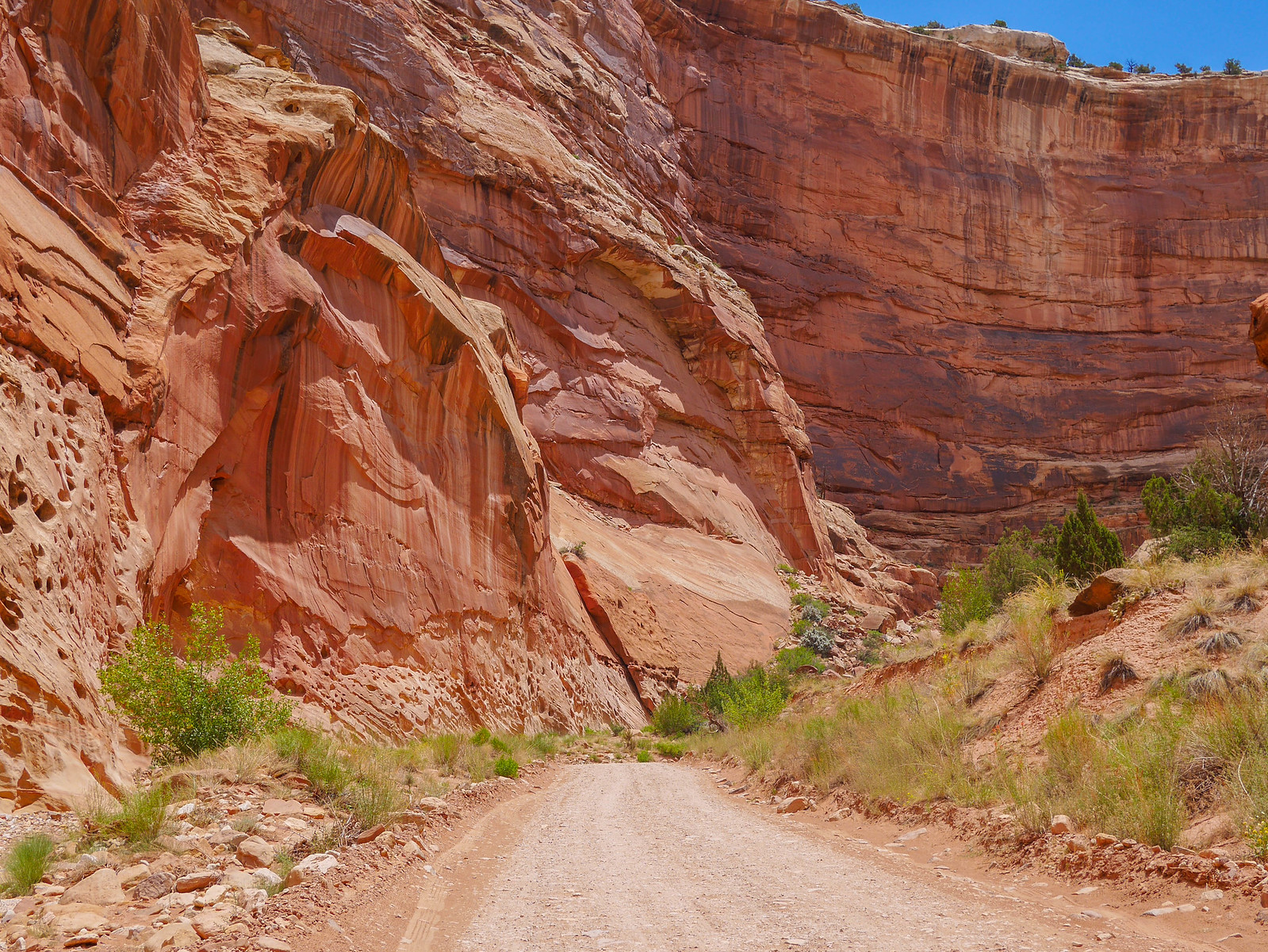 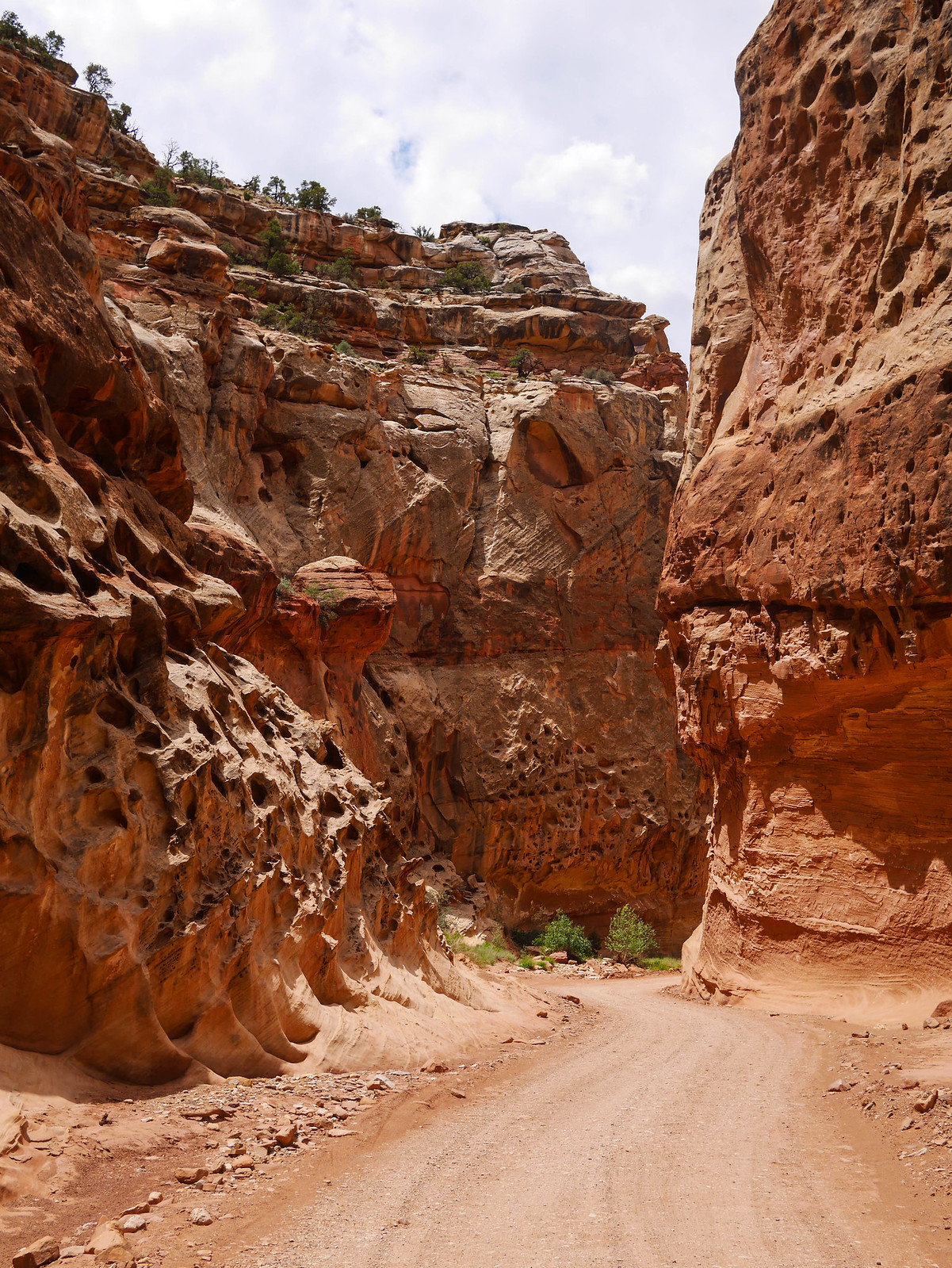 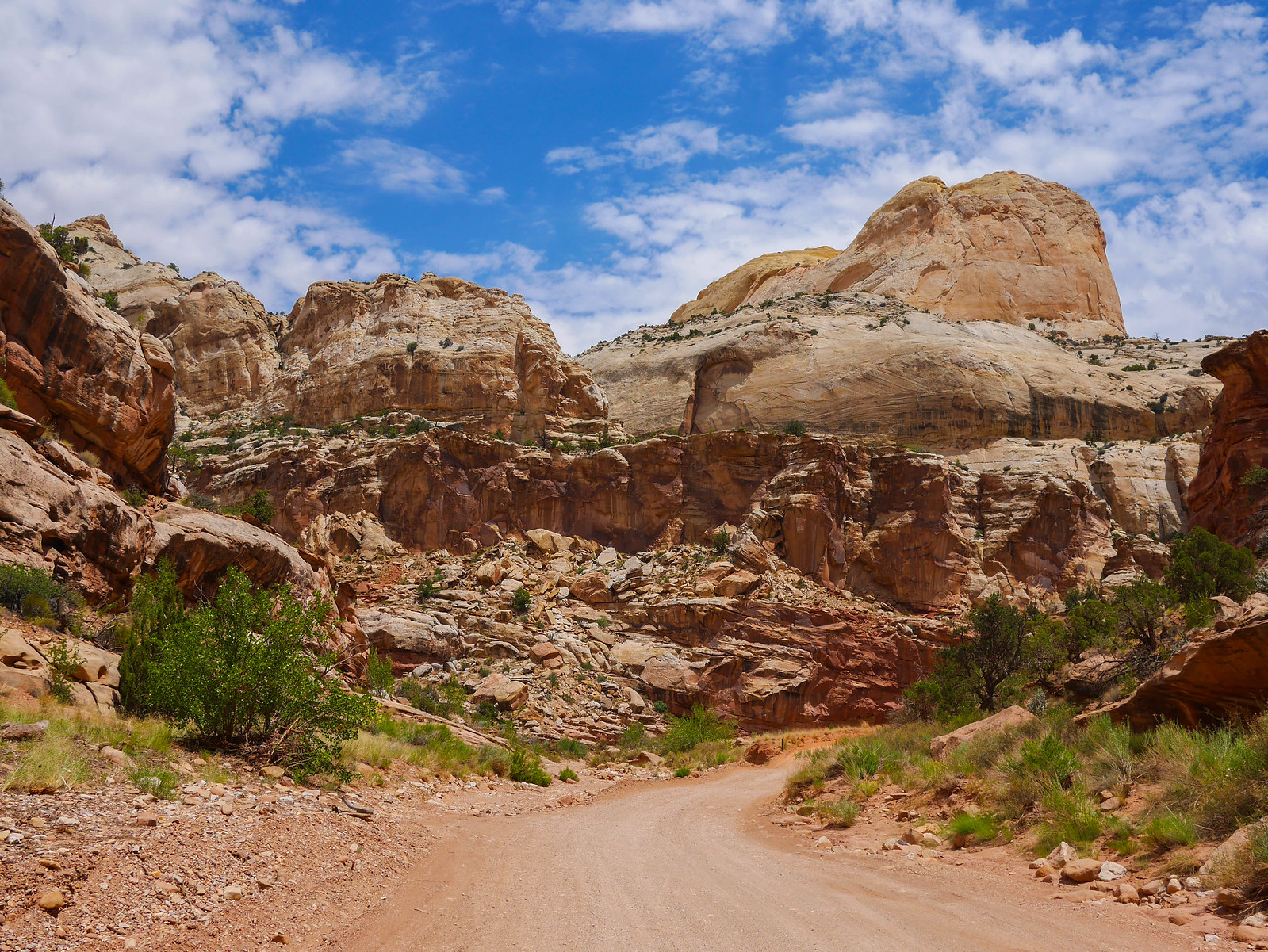 Finally, it was time to hit the road. Peace out Capitol Reef. 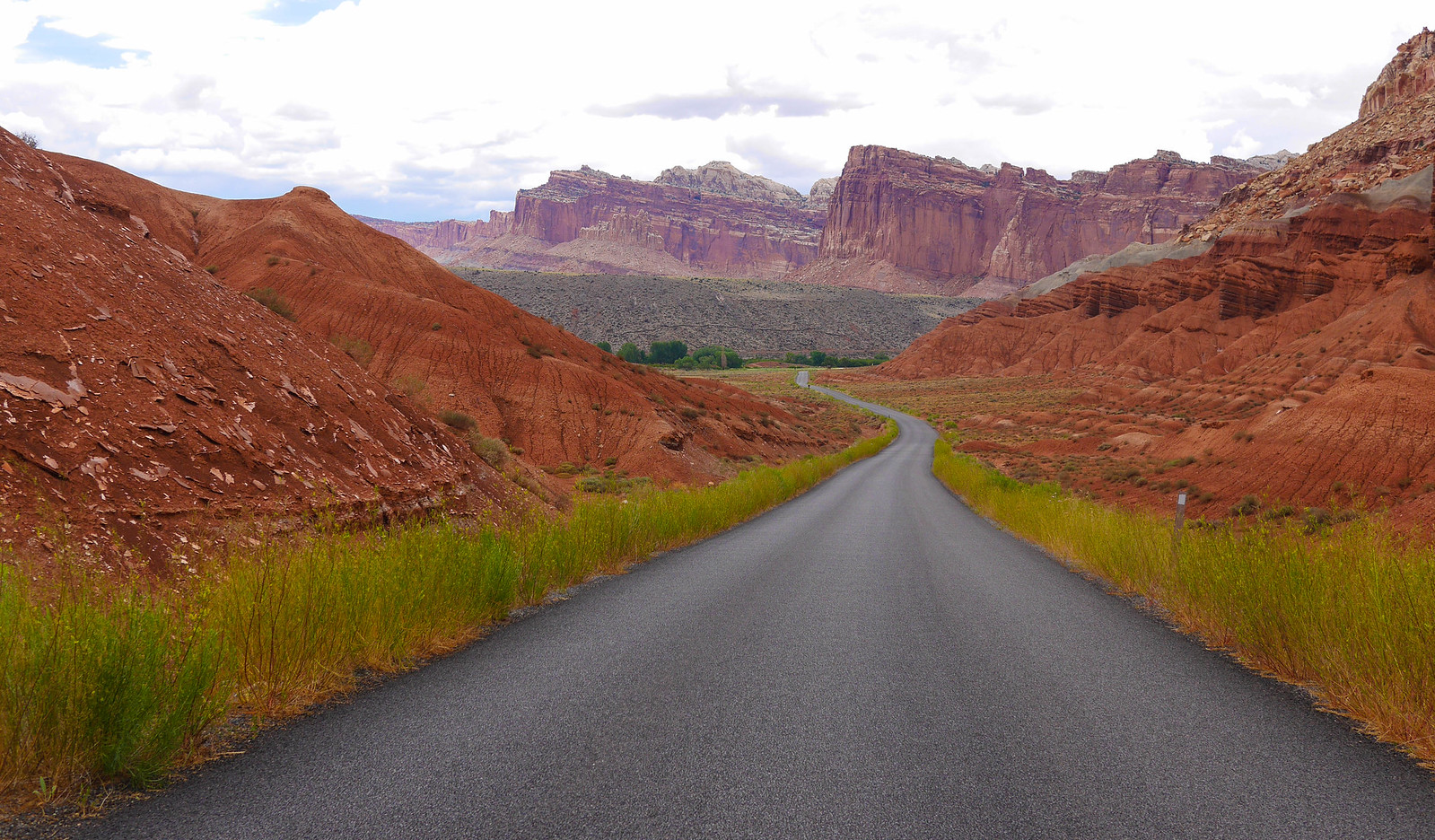