I visited Park City Mathematics Institute (Princeton’s temporary IAS outpost in Utah) for three weeks in 2016 and took advantage of the weekends of my visit as an opportunity to explore the local mountains. I took two short trips, this 20 hour overnighter to Silver Glance in the Wasatch and a two nighter in the High Uinta Wilderness. The Wasatch Range lies between Salt Lake City and Park City and it’s home to the famous Sundance Resort (and the film festival of the same name). The proximity of the range to Salt Lake City means many of the trails are teeming with weekend peak-baggers and families on four wheelers. In an effort to avoid the nature’s Disneyland feel, I decided to forego the classic Mount Timpanogos and instead head to little lake without a maintained trail from which I could look at the peak, even if I wouldn’t be summiting it.

The PCMI programming for the day finished around 3pm and I high-tailed it out of the conference hotel to hit the road to the Wasatch. I’d readied my gear the night before, so all I had to do was throw it in the car and drive the 36 miles from Midway to Silver Lake Flat. My route took me past Sundance, which was a zoo of cars even in summer, before spitting me out onto a narrow and windy dirt road. I had friendly smiles for dusty, shirtless blonde dudes whose names were probably like Brock and Chad as they kindly pulled their F250s up into the bushes so I could squeeze by in my li’l hatchback. I’m sure they thought I was a bit bonkers to be up there in my trusty Honda Fit, and I sure was sure as shit glad the road was dry cause lord knows the Fit ain’t got clearance or torque for dealing with any mud. But anyway, she got me there and I arrived at the trailhead by 4:15pm. The parking lot at Silver Lake Flat was overflowing with people due to the holiday weekend, but I was rollin up late so a lot of the day-trippers were starting to head out and I found a parking spot without too much trouble. I was on the trail by 4:45pm. 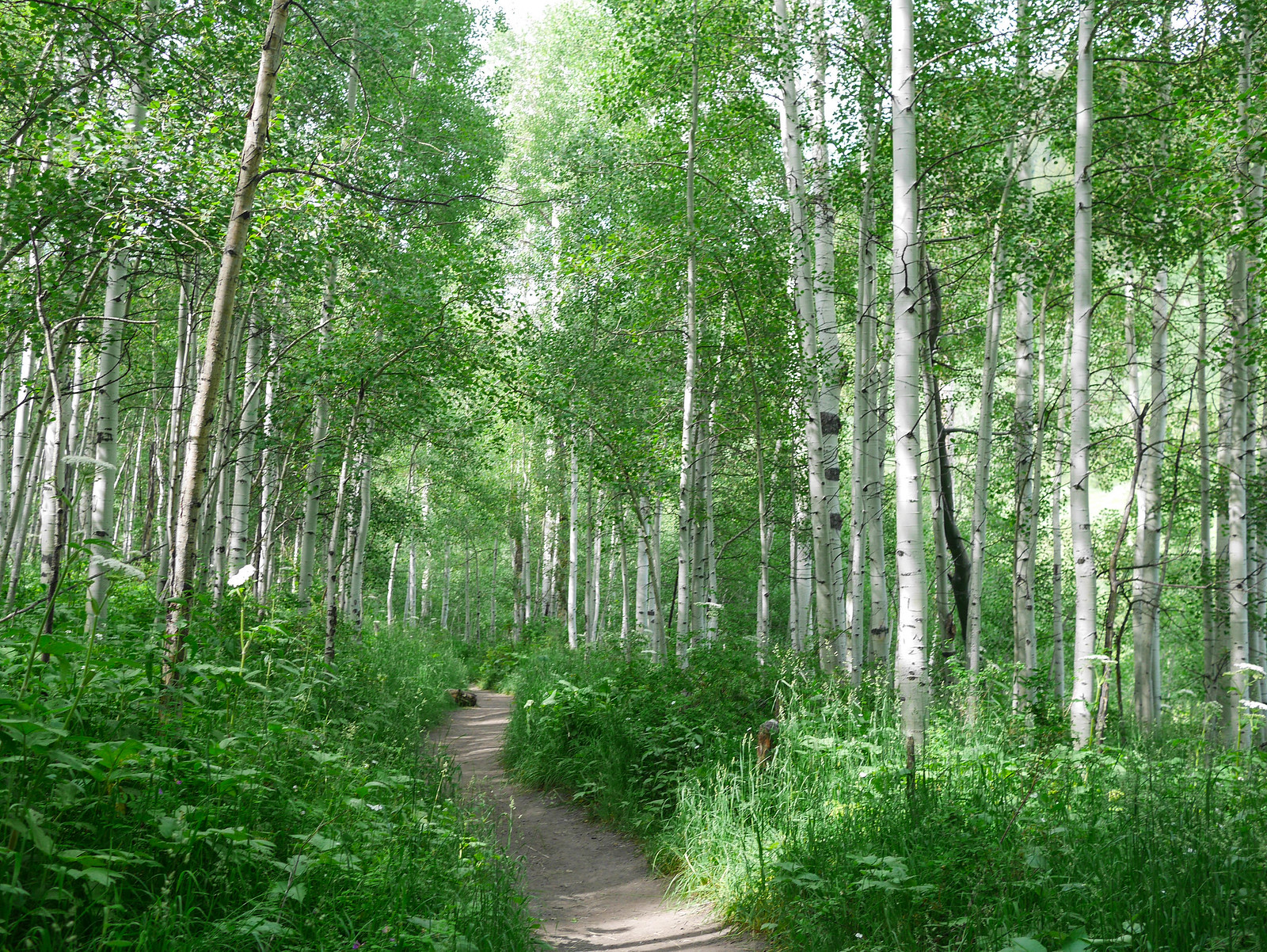 After a pleasant walk through some shimmering aspens, the trail started to climb and I got my first views of Timpanogos. 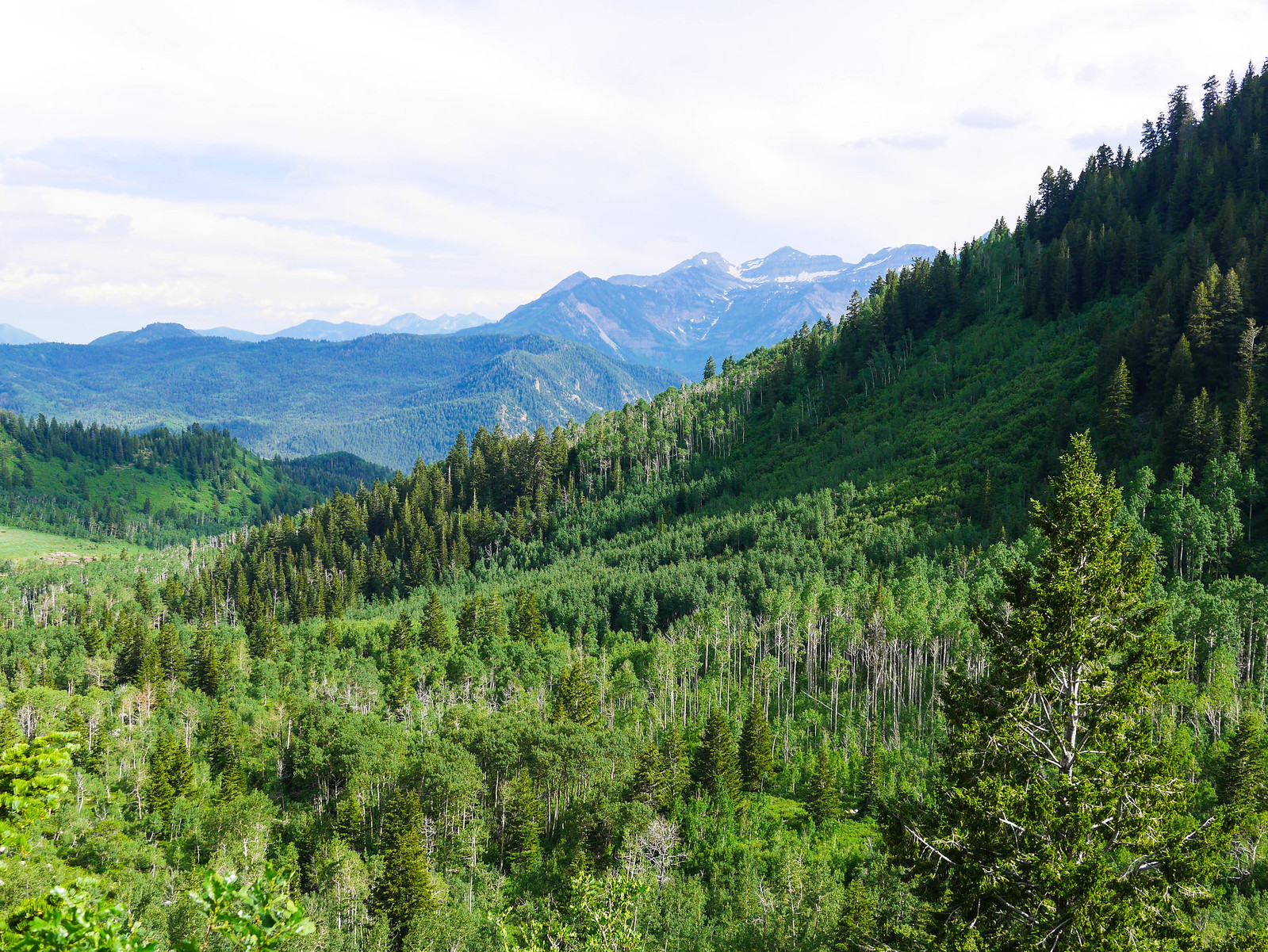 After two-ish miles of pleasant but relatively uneventful hiking, I arrived at Silver Lake. There were still some families along the shore swimming and fishing. My destination was higher, though, and it was here that the maintained trail ended. 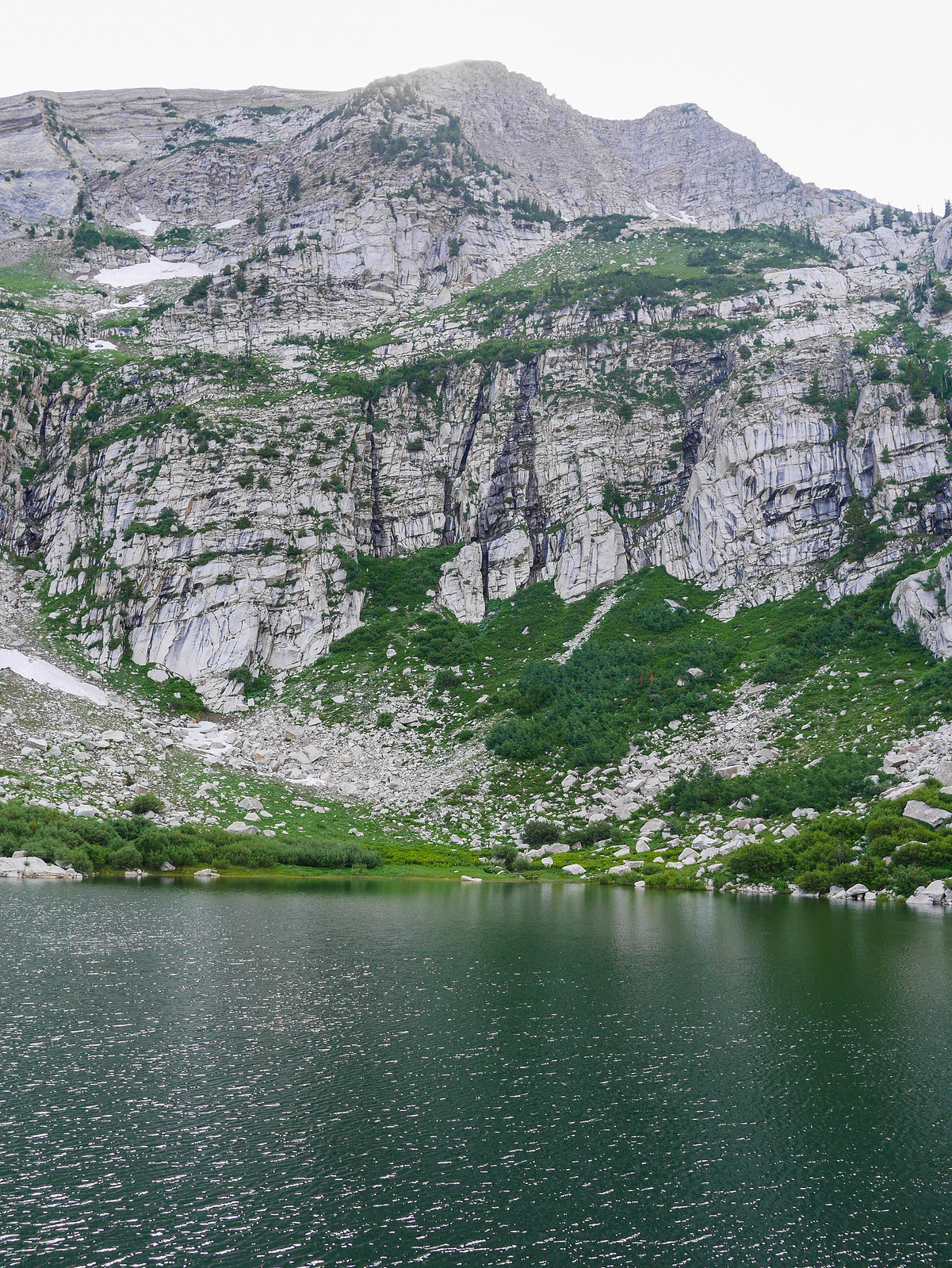 After some poking around, I finally found a use trail I’d read about online. Good lord this thing was steep—it would climb a thousand feet in less than three quarters of a mile. I had forgotten how different it is to backpack in regional and state parks as opposed to the engineered trails of the Sierra Nevada. I was huffing and puffing, but had consistently great excuses to stop… I mean, of course I *had* to pause to take another photo… just look at this view! 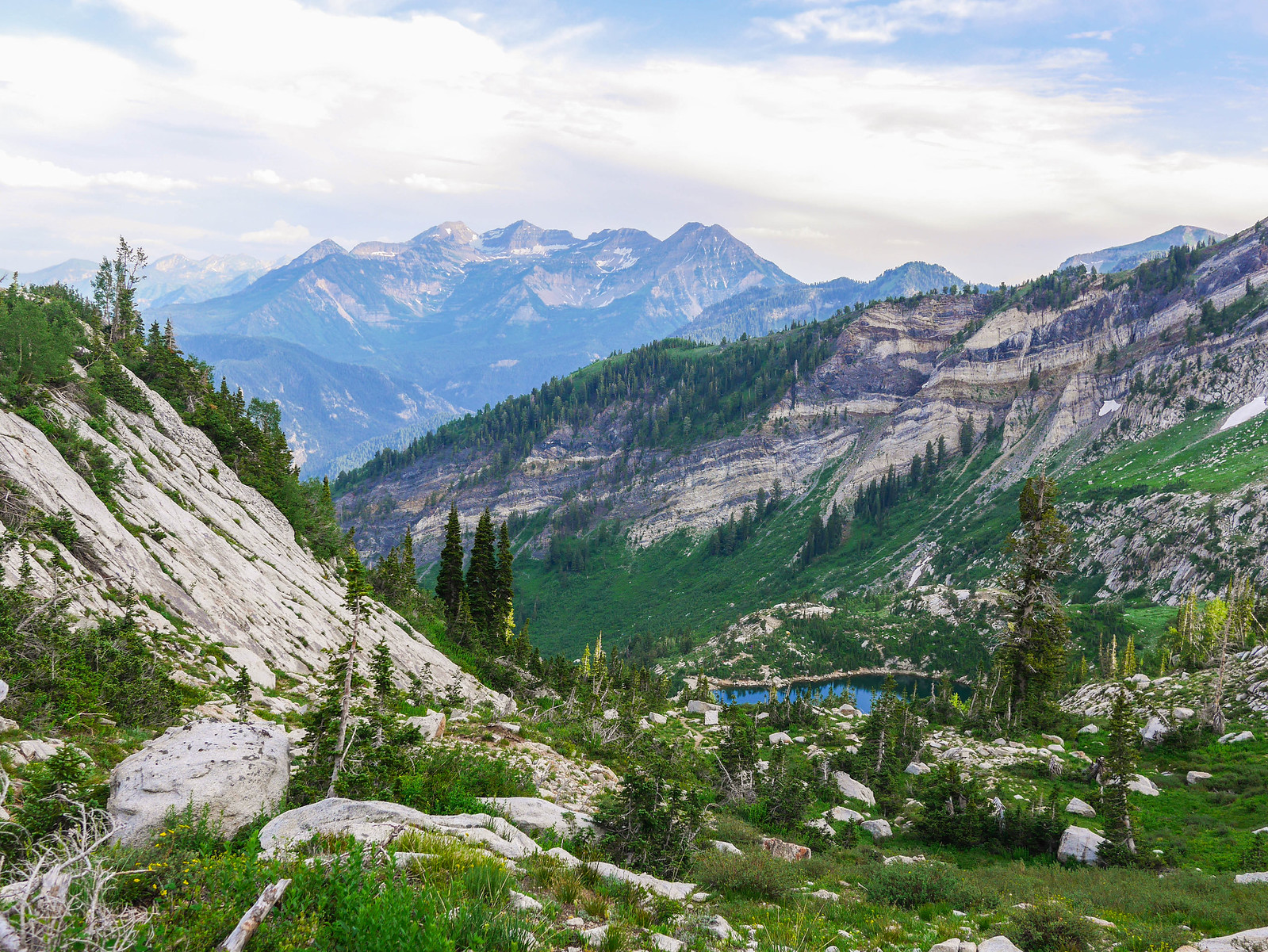 When I finally arrived at Silver Glance, it was around 7pm, still plenty of time to find a great campsite before the 9pm summer sunset. There were some sites in the trees on the south side where the use trail came up, but I opted for a spot a bit above the lake, closer to its inlet stream. I poked around the area above Silver Glance before crashing early. 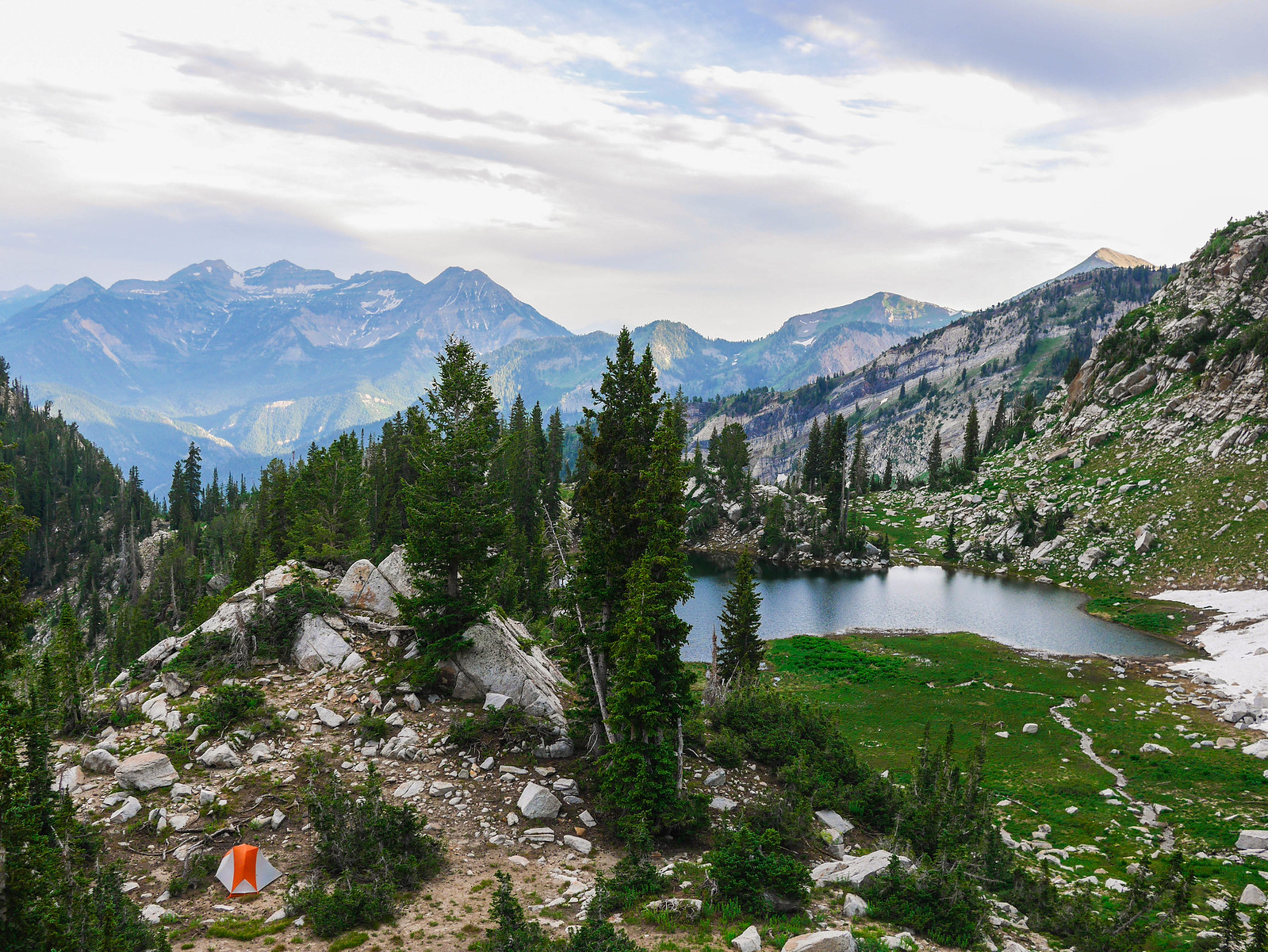 I rose early to catch that alpenglow on Timp. And boy was it worth it. This was some Sound of Music shit right here. The hills were alive, even. 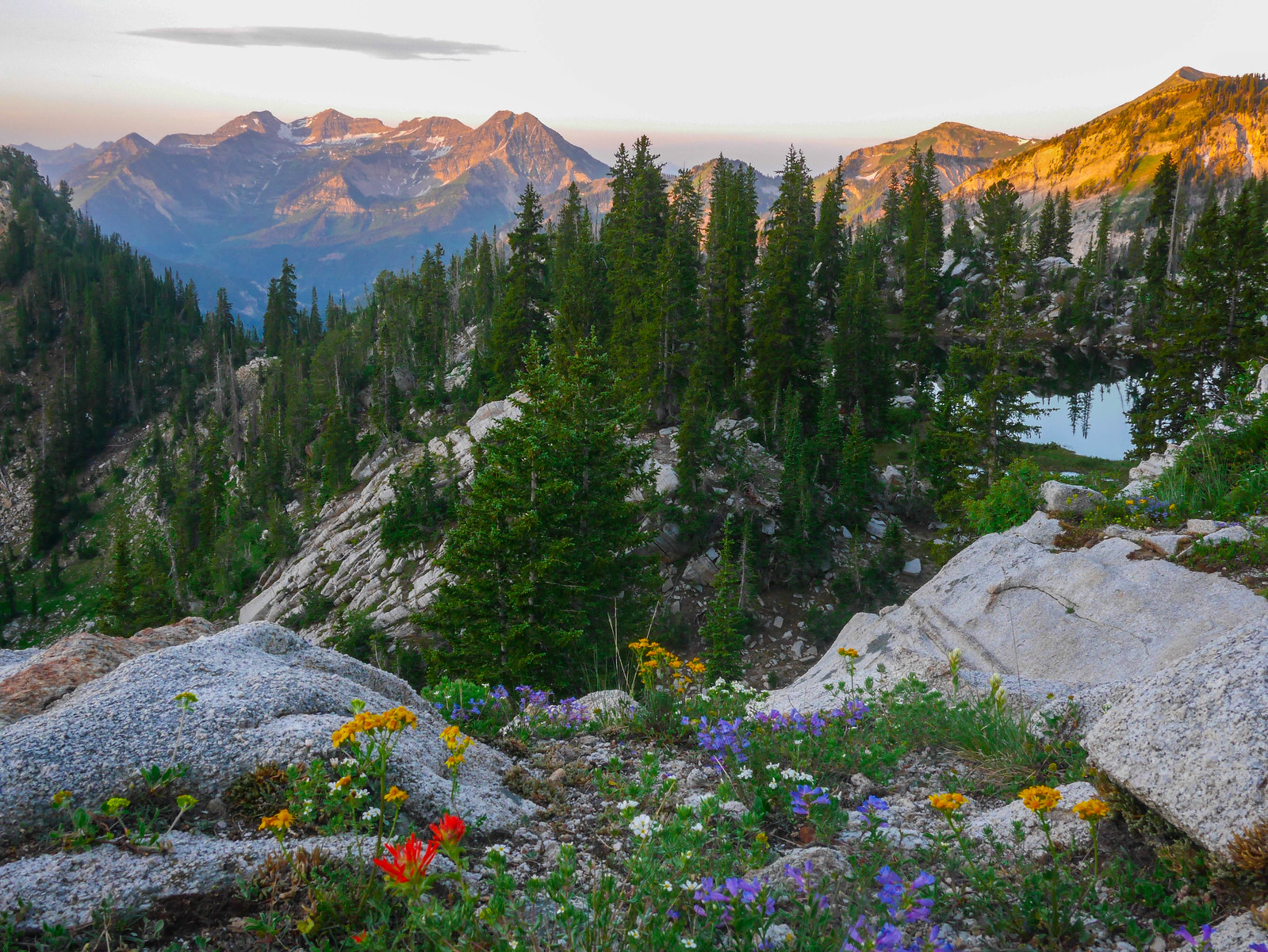 I was feeling a bit tired, though, so I crawled back into the tent for another two hours of napping. I got up in earnest around 10am and decided to head up to the ridgeline between Red and White Baldy to see what I could see down the other side. The route was pretty straightforward with just one annoying bit of talus and some steep sand towards the top. I was rewarded with gorgeous views in every direction. 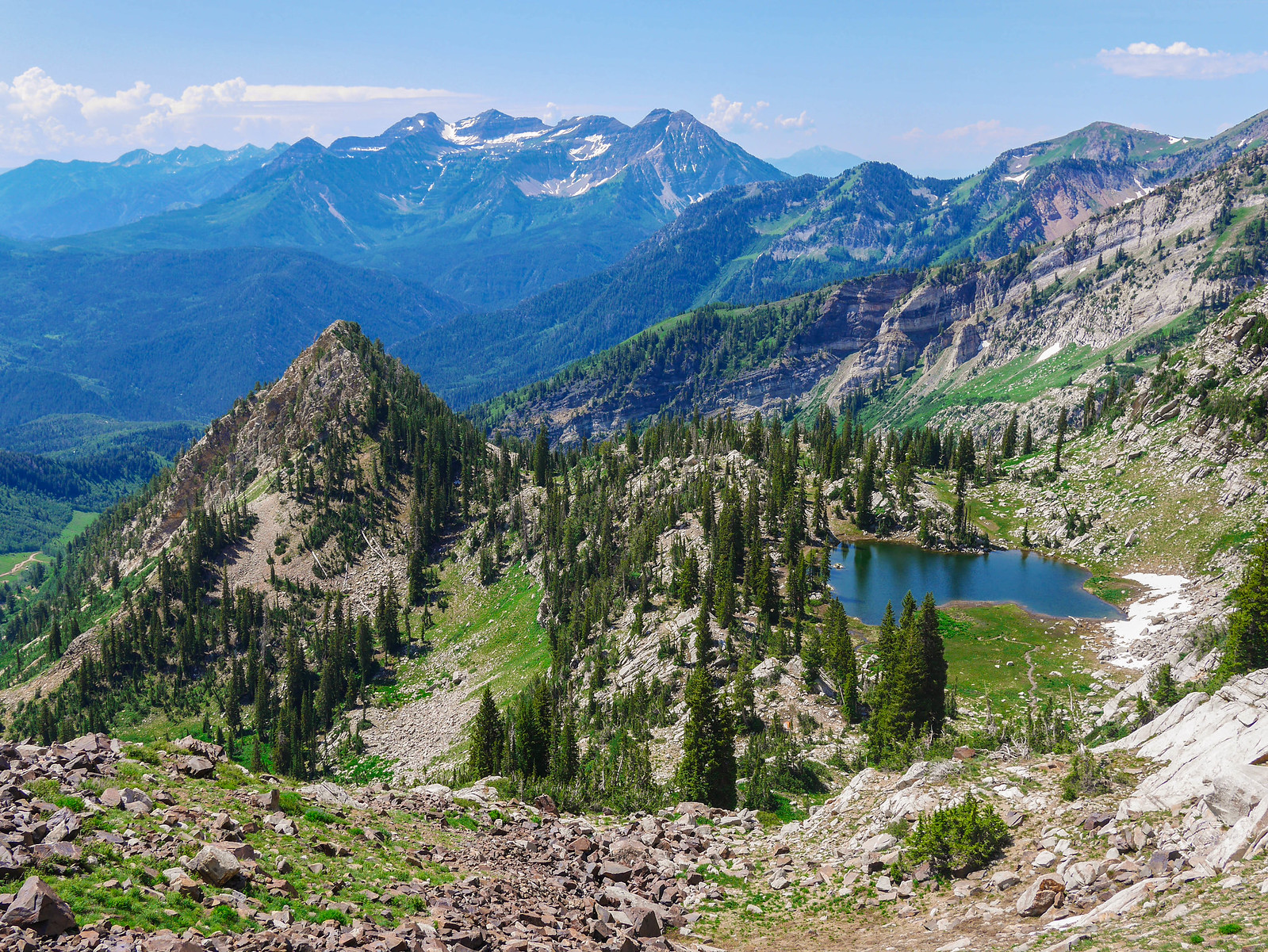 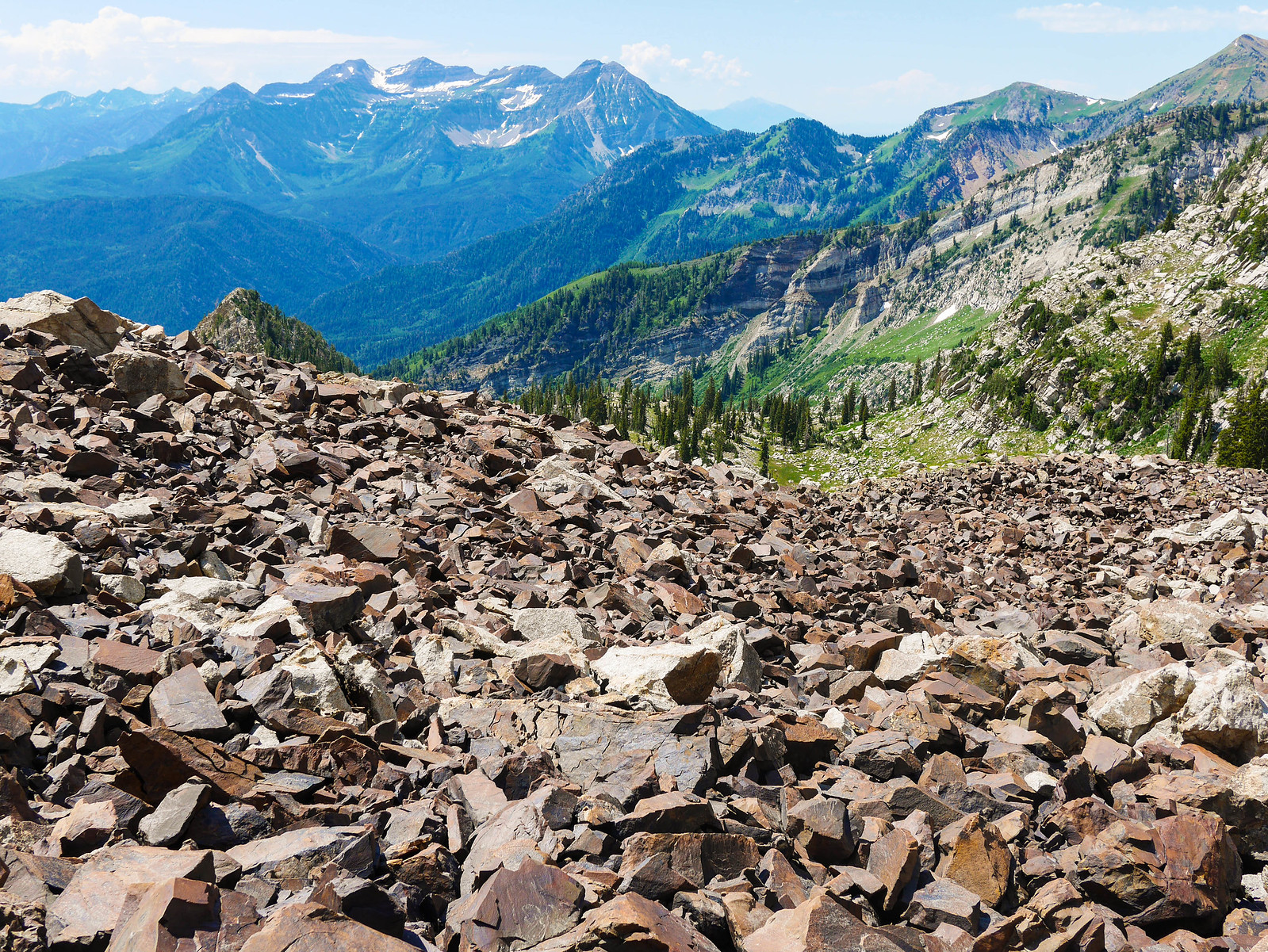 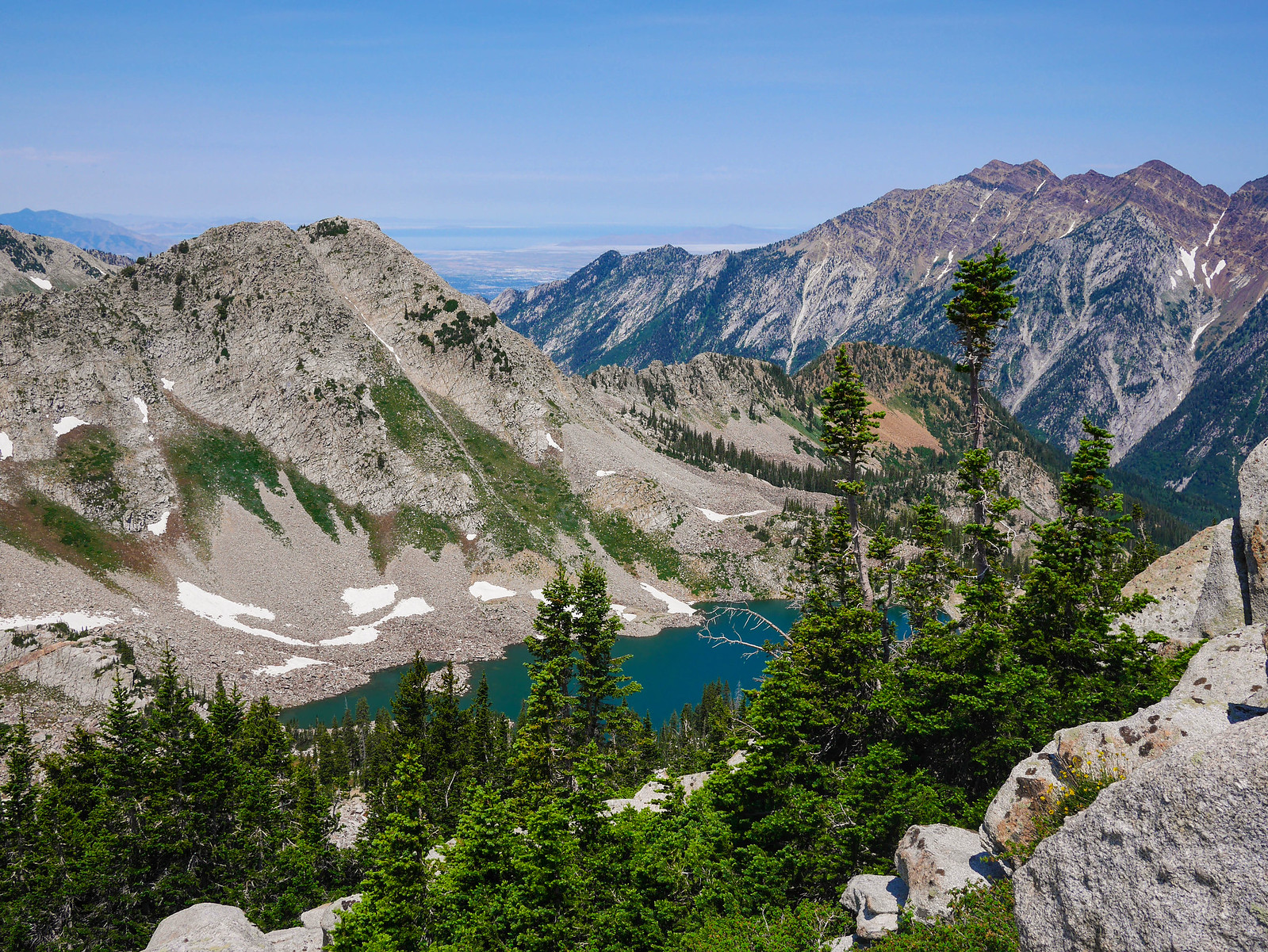 I headed back to camp, packed up, and retraced my steps to the trailhead, this time taking my sweet time and documenting some wildflowers. I was back at the hotel in time for dinner. 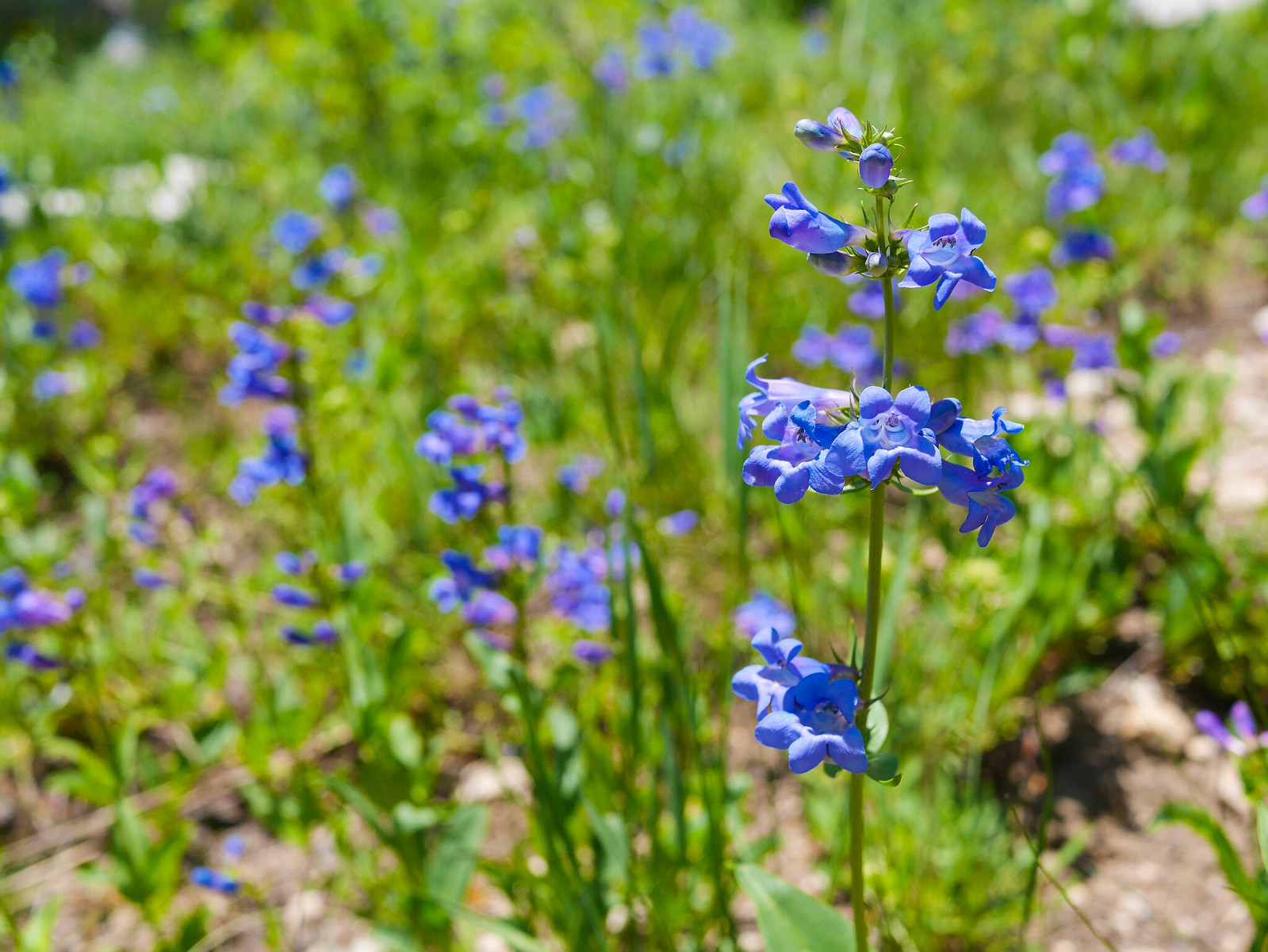 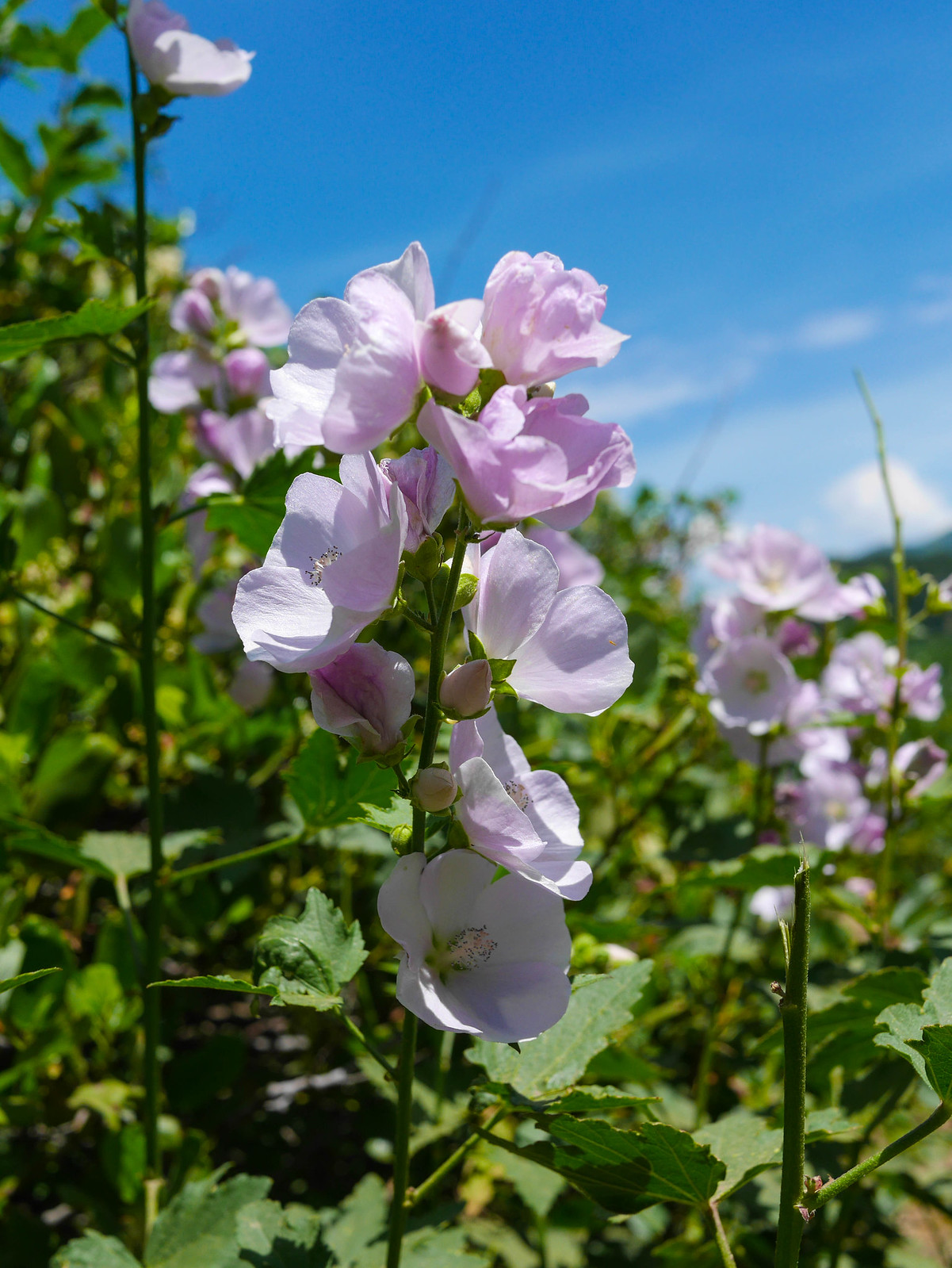 Want to do this trip yourself? You don’t need a permit, but you do need to pay a $6 fee to the Wasatch-Uinta National Forest if you’re a doof like me and forget your parks pass. You’ll park your car at the Silver Lake Flat trailhead. The scale on the National Geographic Wasatch Front North map is a bit too small, but Wasatch Hiker has a pretty decent map you could use. The best plan is probably to print something off of CalTopo.

One thought on “Silver Glance in the Wasatch Range”